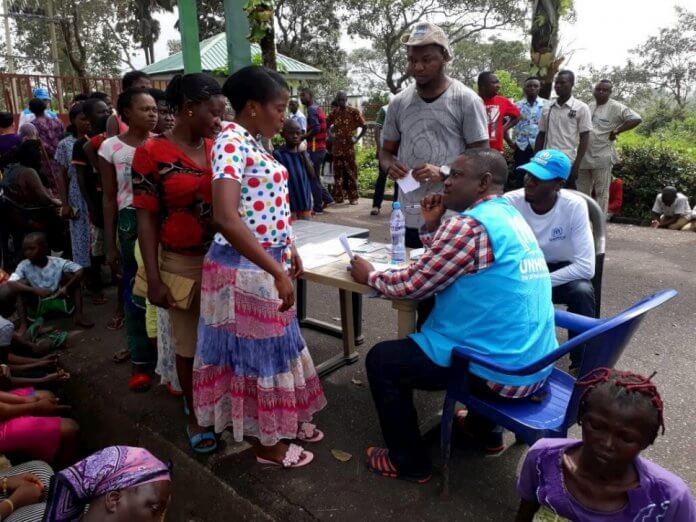 Nigeria’s foremost human rights lawyer Femi Falana SAN has dragged the government of Cameroon to the African Commission on Human and Peoples’ Rights in Banjul, The Gambia over the impending trial of 47 asylum seekers and naturalised Nigerians.

The lawyer wants the commission’s urgent intervention to end “the ongoing human rights violations of the applicants who were forcibly returned to Cameroon by the Nigerian authorities.”

Falana is asking “the Chairperson and the Bureau to urgently hold an extra-ordinary session of the African Commission to address the illegal and unfair return of 47 refugees and asylum seekers, and the continuing violations of the rights of the returnees by the government of Cameroon.

“We also urge the Chairperson of the Commission to speak out strongly and condemn the unfair treatment of the returnees by the government of Cameroon, and request the government to immediately release them from unlawful detention.”

The petition read in part: “Cameroon has ratified the African Charter on Human and Peoples’ Rights and United Nations Convention Relating to the Status of Refugees. At the request of the Government of Cameroon the Nigerian authorities illegally and unfairly returned 47 refugees and asylum seekers to Cameroon on Friday, January 26, 2018. The returnees are mostly leaders of the people of Southern Cameroon and who have been living in Nigeria with their families for years.”

“Some of them have been granted political asylum while others were asylum seekers in Nigeria. On Saturday, 7th January 2018, the Applicants assembled to meet in Abuja to discuss the problems being encountered by several Cameroonian asylum seekers in Nigeria but before the commencement of the meeting security personnel from Nigeria arrested the Applicants and took them to an underground detention centre in a military barracks in Abuja.”

“While the Applicants were detained in Nigeria, they were denied access to their family members, friends, lawyers and doctors. However, the representative of the United Nations Commissioner for Refugees was allowed to visit the Applicants.”

“When the Applicants’ lawyers received information of the plan to deport them to Cameroon, they rushed to the Federal High Court in Abuja to stop the illegal plan. The Applicants also reached out to the Comptroller-General of Immigration, the Minister of Foreign Affairs and the office of the United Nations Commissioner for Refugees in Nigeria.”

“As soon as the Office of the United Nations Commissioner for Refugees in Nigeria confirmed the information it dispatched a letter to the government of Nigeria pointing out that Nigeria has a legal obligation under international law not to deport the detained Cameroonians.”

“But in a demonstration of reckless impunity, the government of Cameroon pressured the Nigerian authorities to hand over the refugees. They were handed over to the Cameroonian security forces who forcefully took them away from Nigeria on Friday, January 26, 2018.”

“On account of the illegality of the deportation, the government of Nigeria could not announce that the refugees had been expelled from Nigeria but the Government of Cameroon decided to celebrate the deportation and threatened to prosecute the deportees for terrorism. We submitted a letter to the Office of the High Commissioner of Cameroon to Nigeria in Abuja to request for access to the Applicants who are currently held incommunicado in Cameroon. The request has to date not been granted by Cameroon.”

“Nigeria has no extradition treaty with Cameroon. Hence, the deportation was carried out outside the ambit of the extradition laws of Nigeria and Cameroon and the African Charter on Human and Peoples’ Rights.”

“In removing the Applicants from Nigeria, the government of Cameroon breached the human rights of the Applicants to enter Nigeria, reside, seek and obtain asylum guaranteed by Article 12 (3) of the African Charter on Human and Peoples’ Rights. The government of Cameroon also breached article 12 (4) of the African Charter, which provides that every individual shall have the right, when persecuted to seek and obtain asylum in other countries in accordance with the laws of those countries and international conventions.”

“Apart from the violation of the African Charter, the government of Cameroon breached its legal obligations under the 1951 United Nations Convention Relating to the Status of Refugees and the 1969 Organization of African Unity Convention on Refugees and which have guaranteed the rights of refugees and asylum seekers in Nigeria to protection.”

“The Applicants are the leaders of the movement agitating for the creation of the Republic of Ambazonia from Cameroon. In 2002, the Applicants filed a suit at the Federal High Court in Abuja to determine whether the people of Southern Cameroon were not entitled to self-determination within their clearly defined territory separate from the Republic of Cameroon. The government of Nigeria decided to settle the case out of court.”

“By a consent judgment delivered by the Court on March 5, 2002, the government of Nigeria agreed to file a suit at the International Court of Justice to have a judicial confirmation of the human right of the people of Southern Cameroon to self-determination. The government of Nigeria also undertook to take other measures as may be necessary to place the case of the people of Southern Cameroon for self-determination before the United Nations General Assembly and other international organizations.”

“Upon the arrival of the Applicants in Cameroon and without any investigation whatsoever, the government of Cameroon announced that they would be tried for terrorism. The Applicants have been detained illegally from January –November, 2018.”

“The Applicants have since been arraigned for terrorism before a military tribunal specially constituted for the purpose of persecuting them even though they have never engaged in terrorist activities in Cameroon.”

“The trial of the Applicants is scheduled to commence in Cameroon on January 10, 2019 whereas their lawyers who are based in Nigeria have been denied access to them and the opportunity to defend them.”

“The government of Cameroon is also reportedly violating the rights of the 47 returnees to personal liberty, freedom of movement (including the right to leave their country), fair trials, freedom of expression and depriving them of their liberty to be treated with humanity and respect for the inherent dignity of the human person. The situation in Cameroon is characterised by widespread and massive violations of human rights and humanitarian law with growing numbers of victims lacking access to an effective remedy.”

“The government of Cameroon’s treatment of the 47 returnees falls with the ‘worst crimes’ of the Rome Statute of the International Criminal Court, which in article 7 defines crimes against humanity to mean acts such as deportation, imprisonment or other severe deprivation of liberty in violation of fundamental rules of international law, torture and other similar acts that are committed as part of a widespread or systematic attack directed against any civilian population.”

“The Applicants are filing this Application/Communication with the African Commission because no adequate or effective domestic remedies exist to address the violations alleged in this Communication.”

“Generally, local remedies must be exhausted prior to submitting a Communication to the Commission. There are, however, exceptions to this general rule. The African Commission has stated that local remedies must be available, effective and sufficient. A local remedy is considered available if the petitioner can pursue it without impediment, it is effective if it offers a prospect of success and it is sufficient if it is capable of redressing the complaint. Given the on-going human rights crisis in the country, it is impossible to exhaust domestic remedies in Cameroon.”

“In the light of the forgoing, the Applicants hereby urge the African Commission on Human and Peoples Rights to: Urgently hold an extra-ordinary session of the African Commission to address the illegal and unfair return of 47 refugees and asylum seekers, and the continuing violations of the rights of the returnees by the government of Cameroon; Hold the government of Cameroon to account for violating the rights of the 47 naturalised Nigerians, refugees’ and asylum seekers’ rights to freedom from torture and other human rights.”

“The Commission should make an official visit to Cameroon with special rapporteurs having relevant mandates and put pressure on the authorities to immediately release the returnees from unlawful detention and end the politically motivated trial of naturalised Nigerians, refugees and asylum seekers.”

“The Commission should hold that the continuing detention, mistreatment and unfair trial of the returned naturalised Nigerians, refugees and asylum seekers by the government of Cameroon amount to cruel and degrading treatment and in conflict with the country’s human rights obligations, including under the African Charter on Human and Peoples’ Rights and the International Covenant on Civil and Political Rights.”

“The Commission should ask the government of Cameroon to immediately stop the mistrial of the 47 refugees and asylum seekers before a military tribunal and return them to Nigeria to rejoin their families.”