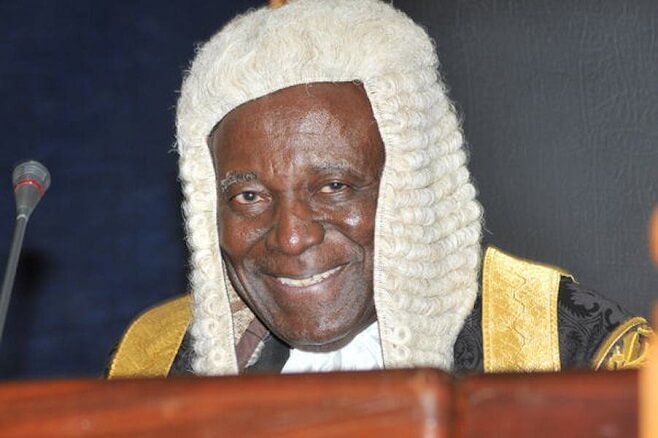 Justice kutigi was born in Kutigi, North-Western State (now located in the Lavun Local Government Area of Niger State), Kutigi attended elementary school in that town and middle and secondary school in Bida. He then moved on to Government College (now known as Barewa College), and then to Ahmadu Bello University (both in Zaria, Kaduna State). He left the country for England, where he studied at the School of Oriental and African Studies, University of London and Gibson and Weldon, before returning to attend the Nigerian Law School in Lagos, Lagos State. He was called to the bar in approximately 1964.

Kutigi served as the Attorney General and Commissioner for Justice in Niger State before becoming a high court judge in 1976. He joined the Supreme Court in 1992 and President Olusegun Obasanjo appointed him to the position of Chief Justice to succeed the outgoing Salihu Alfa Belgore. Belgore retired on 17 January and Kutigi succeeded him on 30 January, after being confirmed by the Senate.

Justice Kutigi retired on 30 December 2009, having reached the mandatory retirement age of 70. He swore in his successor, Aloysius Iyorgyer Katsina-Alu. The President of Nigeria usually swears in the Chief Justice, but President Umaru Musa Yar’Adua was not available on this occasion due to ill health. He was the 11th Chief Justice of Nigeria from 30 January 2007 – 30 December 2008.

He afterwards returned to serve as a high court judge until his death in October 2018. Kutigi also continued to attend Council of State meetings held at the decision of the president.

In 2014 he was appointed chairman of the National Conference on constitutional matters by President Goodluck Jonathan His appointment was widely welcomed by those on all sides of the Nigerian political spectrum with praise coming for his impartiality and fair handedness On 12 June 2014 he stepped in to separate northern and southern politicians who almost came to blows during a conference meeting over a disagreement on holding a one minute silence to honour those that died during the 1993 presidential election Kutigi later described the conference as the “most arduous” to have been held in Nigeria’s history due to the short length of time, four and a half months, that had been allowed for it. By its conclusion more than 600 resolutions had been addressed covering points of law, public policy and the constitution. The findings were presented in a 22-volume, 10,335-page document. LASU Law Loses One of Its Finest – Rest On LA