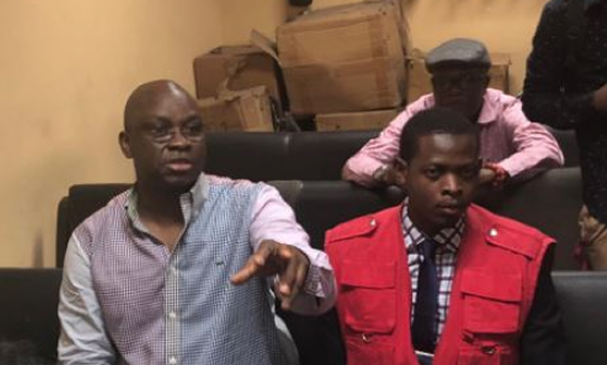 The Economic and Financial Crimes Commission (EFCC) has succeeded in getting the trial of the immediate past governor of Ekiti State, Mr. Ayodele Fayose, transferred from Justice Mojisola Olatoregun of the Federal High Court, Ikoyi, Lagos to another judge.

The EFCC before now, had called 13 out of the 15 witnesses listed in the trial, which started last year November and had enjoyed accelerated hearing.

Chief Judge of the Federal High Court, Justice Adamu Abdul-Kafarati conveyed the transfer of the trial from Justice Olatoregun to Justice C. J. Anekei in a letter dated May 23, 2019.

“I refer to the petition of EFCC on this case and your Lordship’s comments thereto.

“It is apparent that the prosecution has lost confidence in the judge trying this case and justice must not only be done but must be seen to have been done, I hereby transfer this case to Hon. Justice C. J. Aneke for hearing,” the letter read.

The EFCC had in a petition dated March 21, 2019 and signed by Magu, asked Justice Abdu-Kafarati to transfer the trial to another judge.

Magu noted that EFCC was withdrawing its confidence in the trial judge after the altercation between her and the EFCC counsel in open court on the 20th of March, 2019.

It will be recalled that, on March 20, 2019, drama had ensued midway into the hearing between the trial judge, Justice Mojisola Olatoregun and EFCC counsel, Mr Rotimi Jacobs (SAN), when the judge raised concern over the failure of the prosecution to tender the complete three pages of the statement of one of the witnesses.

ALSO READ   Justice Abang after me for criticising him – Fayose

The judge noted that the prosecution, was not doing a good job, saying, “Mr Jacobs, you dare not, you are not competent to look into my ruling, to evaluate my ruling, you are totally incompetent, whether you are a Senior Advocate or not.

“You can only go on appeal, Mr Jacobs. Your mode of advocacy, I do not understand it, it looks like what do they call it? Jankara market.

“You stand here to re-evaluate my ruling, you are incompetent to do that. You do not stand there with impetus and re-evaluate my ruling. I have ruled, relying on two sections of the Evidence Act, if you have an objection, you go on appeal. You have no competence, carrying your wig with arrogance and we have a lot of young lawyers here. What are you teaching them. You stand up to a judge, re-evaluating the ruling of a judge. It will not happen in my court! Your re-examine your witness; if you are not re-examining, then close your case.”

Also, a day after, EFCC petitioned the Chief Judge of the Federal High Court, seeking transfer of the trial to another judge.

Reacting to the EFCC’s move, Fayose’s counsel, Ola Olanipekun (SAN) had said the petition was misconceived, unsustainable and frivolous.

He described the petition as a subtle attempt to intimidate and stampede the court into doing what EFCC liked or wanted in disregard of provisions of the Administration of Criminal Justice Act (ACJA) 2015 and right of the first defendant to expeditious hearing of his case, as well as the need to avoid wasting public funds and scarce judicial time on de-novo trial.

“No party in a criminal case should be allowed to choose or determine the Judge to hear its or his case. Granting such a request for transfer will constitute a dangerous precedent, which will imperil the much cherished independence of the judiciary as the bastion of the rule of law,” he said.

Olanipekun argued further that the petition requesting transfer of the part-heard criminal case in which prosecution had already called 10 witnesses is “legally misconceived having regard to provisions of Section 98(2) of the ACJA 2015 and the recent Court of Appeal decision in the case of F.R.N V. LAWAN (2018) LPELR-43973 (C-A).”

Despite the EFCC petition, the trial continued on May 12, 2019, with a Prosecution Witness causing a stir in the court when contrary to his extrajudicial statement to the EFCC, he told the court that he did not move cash from Afao Ekiti, Fayose’s hometown on the 16th of June 2014 and that the two vehicles he used to drive in Zenith Bank were grounded on that day.

The witness, Mr Adewale Aladegbola Clement, a former driver to Zenith Bank Ado -Ekiti branch who was suppose to be the second prosecution witness for the day told Justice Mojisola Olatoregun, that he got to know about Afao Ekiti sometimes in 2014 when the head of cash payment section of the bank told him that there is something to be done in Afao Ekiti and that when he asked him what that thing was, he said it was unofficial.

The witness said he was told to lie by the bank Cash Officer, Okemute Oputu.

He said that on April 16, 2015, the Zenith Bank bullion van was grounded and there was no operations.

Somewhat astonished, the EFCC counsel told the court that he will be asking for adjournment as the witness seems to be a hostile witness.

However, the witness was reportedly arrested and detained by the EFCC.

On May 21, 2018, the trial was further adjourned until June 10, as Justice Mojisola Olatoregun was said to be away on official assignment.