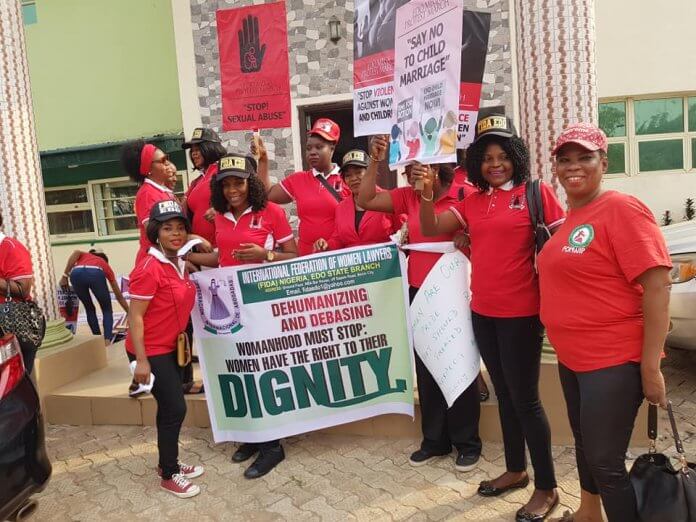 The International Federation of Women Lawyers (FIDA) Nigeria has condemned the growing trend of stripping, beating and torturing women who are accused of committing crime.

In a statement issued by FIDA, the act is not only barbaric, it is also a clear violation of the fundamental right of the victims.

It is likely that you woke up to another video being circulated online, of a female being stripped, beaten and tortured for allegedly committing a crime. This harmful practice of stripping and shaming females has been happening for decades, not only in Nigeria but in other parts of the world and with the advent of social media it has become more obvious how often this abhorrent trend occurs.

Today, FIDA Delta is carrying out a march against dehumanizing and inhumane treatment of women in Delta State in response to an incident which happened last week in the State. A special adviser to the Delta State governor on security, allegedly took his thugs to abduct a woman who ‘disrespected’ him. They stripped her naked, tied her up, flogged her, recorded it and put it on the internet so that they could shame her. The question is, who is really meant to feel ashamed? Is that really the best way to get justice?

Yesterday, FIDA Edo carried out a mega protest march to demand justice for a woman who was stripped, beaten and assaulted by some men on the allegations that she stole a phone. The men thought that it was commensurate justice to insert pepper into the woman’s private parts and to film the cruel and dehumanizing act. In response to the viral video, the Nigerian Police Force have arrested 6 suspects and have issued a statement warning against the dire consequences for persons who resort to criminal acts of self-help. Two wrongs will never make a right.

Social media is being used in an attempt to shame the women but it is having a double effect by switching the conversation on the harmful justice tactics being used. Jungle justice is a human rights conundrum. On the one hand the perpetrators of it are seeking to enforce their own rights but on the other hand they end up violating another person’s rights in the process. This is because it is a violation of the fundamental right to fair trial as enshrined in Section 36 of the Constitution of the Federal Republic of Nigeria (as amended) 1999. The right to a fair trial not only encompasses the right to the presumption of innocence, but also the right to have their case heard by a court or tribunal. Furthermore, such harmful jungle justice tactics are also a violation of Section 34 of the Constitution of the Federal Republic of Nigeria (as amended) 1999 which outlines that every individual is entitled to respect for the dignity of his person. The aforementioned provisions are absolute fundamental rights which should not be curtailed in any circumstance.

The mob system of jungle justice makes it easier for people to feel less guilty and less responsible for the crimes they commit against alleged criminals. It can be argued that a lot of people engage in these harmful ‘justice’ practices because they really do not know any better. Perhaps they are not aware that there are laws which can provide them with proper remedies. Perhaps they are unaware of the due process to follow when seeking justice for an alleged crime. Perhaps they lack trust in the criminal justice system. Regardless, such methods of discipline cannot continue to be seen as acceptable.

The culture of impunity for perpetrators of these harmful jungle justice practices must be brought to an end. It needs to be costly for people to brutalize others. We need legislation and policies in place which categorically outlaw jungle justice. We need aggressive sensitization campaigns against jungle justice. Even more importantly we need to reform our criminal justice systems so that less people will deem it necessary to take matters into their own hands.

FIDA Nigeria remains committed to the promotion, protection and preservation of the rights of women and children in Nigeria. We exercise our mandate through the provision of free legal representation for indigent women and children and also by advocating for gender friendly reforms of the law. We are currently representing the lady in Edo who was subject to the cruel insertion of pepper into her private parts and we will work to ensure that true justice is served in her case. Please contact us if you are a victim or if you are aware of any other cases of jungle justice which falls within our ambit.

A Proposal by NCGF on “The Proposed Alteration to the 1999...