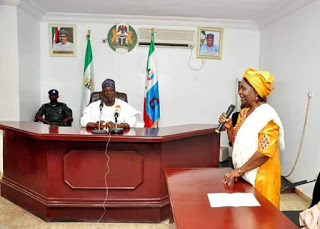 Preparatory to the take off of a division of the Court of Appeal in Gombe State, a seven man team headed by from the federal judiciary visited the state on a facility assessment tour.

The team, headed by the presiding judge of the Court of Appeal, Jos Division, Hon. justice Adzira Gana Mshelia, in company of some state government officials, toured the temporary and proposed permanent sites of the court.

The team was mandated by the President of the Court of Appeal, Justice Zainab Bulkachuwa, to inspect some  facilities and make recommendations for the smooth take-off of the appeal court in Gombe State.

Facilities visited included the proposed judges’ residential quarters which is at about 80 percent completion stage, court premises, junior and senior staff quarters, among others.

To show his commitment to the immediate take-off of the court, Governor Inuwa Yahaya had provided a fully furnished court hall, five fully furnished chambers for the judges of the court of appeal, a well equipped registry office, residential quarters for judges’ accommodation, temporary accommodation for staff as well as a 2-hectre  of land along Bauchi road for the construction of the permanent Court of Appeal Division Complex.

The team had earlier paid a courtesy visit on Governor Muhammadu Inuwa Yahaya, who was represented by his Deputy,  Dr. Manassah Daniel Jatau.

The Deputy Governor appreciated the approval of the establishment of a Court of Appeal in Gombe, expressing delight that it would ensure speedy dispensation of justice and create more job opportunities for the citizenry.

He assured that the state government will provide the needed support to ensure the court begins operation without delay.

The Deputy Governor, in company of the Secretary to the State Government Prof. Ibrahim Abubakar Njodi and the Principal Private Secretary (PPS) to the governor, Alhaji Usmam Kamara, then led the team to inspect the facilities at the temporary site, located at the Old High Court Complex along University Road, Tudun Wada.

The leader of the delegation, Justice Mshelia commended the commitment and disposition of the state government towards the speedy take-off of the appellant court, the development of which he said will ensure quick dispensation of justice.