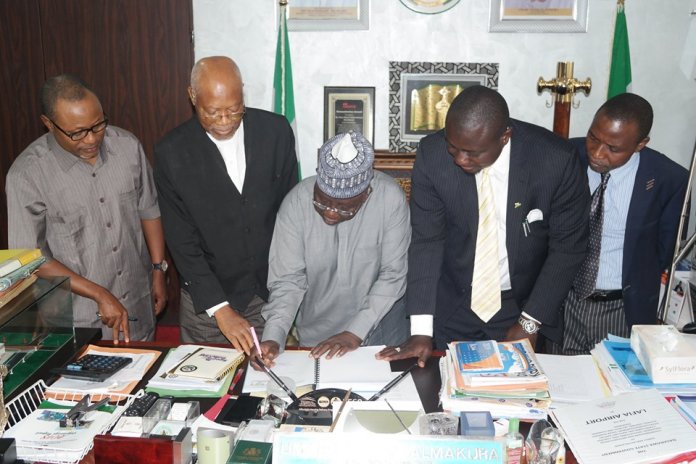 His Excellency Umaru Tanko Al-Makura has made history by signing into Law the Nasarawa State Administration of Criminal Justice Law 2018, flanked by the Chief Judge of Nasarawa State Justice Suleiman Dikko, the Attorney General Dr. Abdlkarim Kana, the SSG Barr. Mohammed Hassan Abdullahi and the Permanent Secretary Ministry of Justice and the Solicitor General Barr. Ishaku Usman the Governor altered the course of Justice in Nasarawa State as he put his pen to this all important Law .

Section 1 of the Nasarawa State Administration of Criminal Justice Law 2018 succinctly states that the purpose of the Law is to ensure that the system of administration of criminal justice in Nasarawa State promotes efficient management of criminal justice institutions, speedy dispensation of justice, protection of the society from crime and protection of the rights and interests of the suspects, the defendants and the victims.

This purpose as set out in Section 1 is indicative of a paradigm shift in the criminal justice system; from the punitive approach to a restorative one, with the needs of the society, victims, vulnerable persons and human dignity at the forefront.

As a result, the ACJL has introduced innovations, which aims to enhance the efficiency of the criminal justice system.

There are many notable innovations in NSACJL 2018.

Previously, the police could arrest a person without a warrant. This includes any person who has no ostensible means of sustenance and who cannot give a satisfactory account of his/her activity. This led to a practice of Police and other law enforcement agencies arresting friends and close relatives of the suspects even when they are not linked in any way. This thankfully is now prohibited. ACJL sets out the procedure to follow when arrests are carried out by the Police. It prohibits arrest in lieu. Accordingly, it is prohibited to arrest another person in place of a suspect. This provision of the ACJL if adhered to in the observance as opposed to in the breach, would likely reduce congestion in the Prisons, Police cells and other detention facilities.

The ACJL has maintained the provisions of CPC with regards to notification of cause of arrest. However it has further expanded its scope by mandating Police Officers or any other person to inform the suspect of his right to: remain silent or avoid answering any question until after consultation with a legal practitioner or any other person of his own choice;
consult a legal practitioner of his choice before making, endorsing or writing any statement or answering any question put to him after arrest;
free legal representation by the Legal Aid Council of Nigeria, where applicable.

Humane treatment of an arrested person and prohibition of arrest in civil cases.

ACJL provides that a suspect shall be accorded humane treatment, having regard to his right to the dignity of his person.

It further provides that a suspect shall not be arrested merely on a civil wrong or breach of contract.

Inventory of property by the police.

ACJL provides that the process of recording personal data of suspect shall be concluded within a reasonable time of the arrest of the suspect, but not exceeding 48 hours. This is to prevent unreasonable pre-trial detention by the police and other law enforcement agencies.

ACJL provides that where a person arrested with or without a warrant of arrest volunteers to make a confessional statement; the police officer shall record the statement in writing and may record the making of the confessional statement electronically on a retrievable video compact disc or such other audio visual means. This provision is aimed at curbing allegations of violence on suspects while in custody and to prove the voluntariness of that statement in court.

Recording of statement of suspect

The law mandates the Commissioner of Police and the head of every agency authorised by law to make arrests to remit quarterly records of all arrests made with or without warrant in relation to state offenses to the Attorney-General of the state.

The law provides that where a suspect has been taken into police custody without a warrant for an offence other than an offence punishable with death, the officer in charge of a police station shall inquire into the case and release the suspect arrested on bail, and where it will not be practicable to bring the suspect before a court having jurisdiction with respect to the offence alleged, within 24 hours after the arrest.

Power to release on bail before charge is accepted

The law provides that where a suspect is taken into custody, and it appears to the officer that the inquiry into the case cannot be completed forthwith, he may discharge the suspect on his entering into a recognizance, with or without sureties for a reasonable amount, to appear at the police station and at such times as are named in their recognizance unless he previously receives a notice in writing from the police officer in charge of that police station that his attendance is not required.

The law provides that an officer in charge of a police station or an official in charge of an agency authorised to make arrest shall on the last working day of every month report to the nearest Magistrate the cases of all suspects arrested without warrant within the limits of their stations or agency whether the suspects have been admitted to bail or not.

The law also provides that the Chief Magistrate, or where there is no Chief Magistrate within the police division, any Magistrate designated by the Chief Judge for that purpose shall, at least every month, conduct an inspection of police stations or other places of detention within his territorial jurisdiction other than the prison.

Returns by Comptroller- General of prisons.

ACJL has cured the long defective practice where women were constantly denied the right to stand as sureties for the purpose of bail.

Professional bondsperson
The law provides for the registration and use of Bondspersons and gives the Chief Judge the powers to make regulations for the registration and licensing of bonds persons. The Bonds Persons may undertake recognizance, act as surety, or guarantee the deposit of money as required by the bail condition of any person granted bail by the court within the jurisdiction in which the bondsperson is registered.

The Chief Judge is given the power to withdraw the registration of a bondsperson who contravenes the terms of his licence.Where a bondsperson arrests a defendant or suspect who is absconding or whom he believes is trying to evade or avoid appearance in court he shall immediately hand him over to the nearest police station. The defendant must be taken to the appropriate court within twelve hours of his arrest.

The law provides that a suspect who is yet to be charged with an offence can be ordered by a court to be kept in prison custody, pending his bail, trial or release. It further provides that the remand must be for a probable cause. It sets out conditions wherein the court will take in establishing probable cause for a remand.