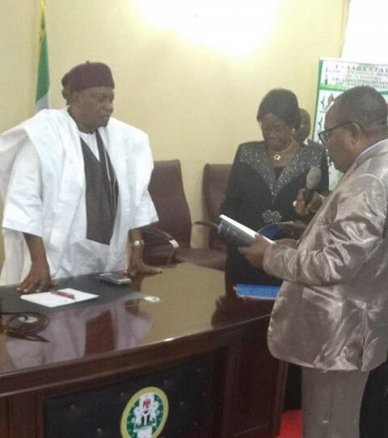 Taraba State Governor, Darius Ishaku has sworn in a new chief judge of the State.

The governor charged him to be fair to all in his dispensation of justice.

Andhetur succeeded Justice Josephine Tuktur who had administered the oaths of office on late former Governor Danbaba Suntai and Darius Ishaku in 2015 and this year.

Ishaku said, from the information at his disposal, he is convinced that the new chief judge will give a good account of himself and make the judiciary in Taraba state proud.

Urging Andhetur’s colleagues to cooperate with him to succeed, the governor said, “The failure of the principal officer of the judiciary is the failure of its members.”

“The judges in the state have done well, as a group. The individual appointed from among them to lead will certainly not disappoint,” he said.

Governor Ishaku said, in the second tenure of his administration, he will consolidate on the gains of his first tenure. He called for peace so that the development of the state will continue uninterrupted.

The new Taraba chief judge assured the governor of the cooperation of the judiciary in order to ensure the success of his rescue programme.

“The judiciary in the state will help the executive and legislative arms of government in the state to ensure there is peace so that the rescue mission of the administration of Darius Ishaku shall not be derailed,” he said.