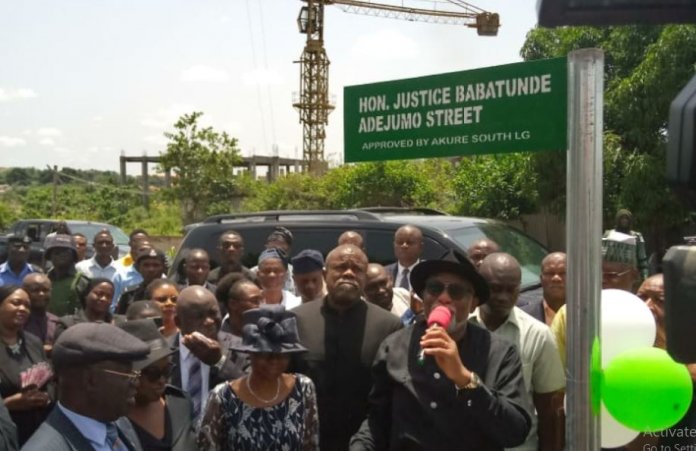 The Government of Ondo State on Saturday 18th May 2019 named a street at Alagbaka, Government Residential Area after the President of the National Industrial Court, His Lordship, Hon. Justice Babatunde Adejumo, OFR in recognition of his contributions to the development of the Judiciary, State, and Nigeria in general.

The governor unveiled the street after the commissioning of the Industrial court car park at Akure judicial division.

“Name is for identity, credibility, and pride; having a street named after someone in his locality symbolizes tremendous recognition.”— Sizwi Bansi, Popular literature.

Honourable Justice Adejumo, OFR, was born in Ikaram Akoko, Ondo State on the 1st day of October 1954 to Pa Oloniyo Adejumo and Princess Awawu Adejumo, both of blessed memory.

Hon. Justice Adejumo attended Muslim Primary School, Ikaram Akoko between 1962 to 1965.  Later moved to Owo in Ondo State where he lived with a friend to his late father, Chief Magistrate Sawyer, who was in charge of the then Owo/Akoko Magisterial District and completed his Primary Education at St. Patrick’s Primary school in 1966.

It is remarkable to note that Honourable Justice Adejumo, OFR never had secondary education.  He relocated to Lagos in 1969 and was an apprentice shoemaker between 1969 and 1972.  He started his own shoemaking business/profession upon his return to Owo in 1973. In 1978 he wrote and passed an entrance examination to Ansarudeen Teachers’ Training College, Ota, Ogun State.

His Lordship graduated with a Bachelor of Laws Hons. (LL.B) Degree in University of Ile-Ife Now Obafemi Awolowo University in 1985 and was called to the Nigerian Bar in 1986.

In 1992, Honourable Justice BabatundeAdejumo, OFR forayed into the world of politics, contested and was elected as Hon. Member of the House of Assembly representing Akoko North West Constituency in the old Ondo State House of Assembly.

As a parliamentarian, His Lordship was productive, courageous, prolific and selfless. He defended the collective interest of the people with rare passion and uncommon rigor and competency. As the Chairman of the House Committee on Judiciary, Fundamental Human Rights and Public Petition, Justice Babatunde Adejumo promoted the interest of the Ondo State Judiciary.

As a lawmaker, his contributions to the issues bordering on the strengthening of democracy and humanity were always interesting, original, incisive, and thoughtful. As an Honourable member, he worked relentlessly with his other colleagues to make sure that the revenue Ondo State is enjoying today came to reality for sponsoring a motion to compel Federal government headed by Chief Alex Shonekan to declare Ondo state as Oil Producing State which was granted.

Furthermore, In order to allow peaceful and cordial co-existence of the Ijaws peaking people in Ondo state with other  Ondo state indigenes, Justice Babatunde Adejumo moved a motion for the speaking of Egberi language in the State’s owned radio and television stations, OSRC.

Upon the termination of the civil rule in 1993, Hon Justice Adejumo, OFR served as Chief Magistrate from 1994 – 1995 at the then Ondo state and was posted to Ikere Magisterial District.

In 1998, His Lordship’s was appointed as a Judge of the Ondo State Judiciary and sworn-in on the 5th of November.

A major milestone was attained in his blossoming judicial career when he was appointed the President of the National Industrial Court on 14th of April, 2003 by the then President Chief Olusegun Obasanjo GCFR and was sworn in by the then Chief Justice of Nigerian Hon. Justice M. L. Uwais GCON, on 5th of May, 2003.

Before the assumption of office by His Lordship, the Court which was established under the Trade Disputes Act, 1976 as amended, only had the main office in an old building situated in 20/22 ojuolobu street, VI, Lagos, and a visiting office at Portharcourt crescent, Area 11 Garki, Abuja.  Hon. Justice B. A. Adejumo OFR ensured that the court has its own enabling Act i.e the National Industrial Court [NIC] Act 2006. In 2007, his Lordship came up with the Rules of Court known as NIC Rule 2007.

In 2011, His Lordship moved the National Assembly to amend the Constitution of Federal Republic of Nigeria 1999 with the coming into effect of Third Alteration Act 2011. By the virtue of section 254c of the 1999 constitution as amended, the Court was conferred with exclusive Jurisdiction and Power to hear matter relating to workplace, industrial relation and matter pertaining thereto.

The Bill (3rd Alteration Act) was subsequently assented to by His Excellency the then sitting president of the Federal Republic of Nigeria, Dr. Goodluck Ebele Jonathan, GCFR on the 4th day of March 2011.

The NIC under the leadership of His Lordship has witnessed unprecedented and commendable physical development and territorial expansion.  The sprawling NIC complex across the country is an alluring model both in terms of aesthetics and functional infrastructure.

The Court now has Twenty-Six [26]Divisions and Eleven [11] Registries in the states where Court has not been established.

NICN under His Lordship is the first Court in Nigeria to introduce unprecedented usage and deployment of Information Communication Technology [ICT] to ease Judicial processes. This facility is widely used and acknowledged by lawyers, litigant, and stakeholders in the judicial sector.

Sequel to His Lordship immense contributions to nation-building, meritorious and unblemished service to the nation and humanity in general, His Lordship was conferred with the Rank of the Officer of the Order of the Federal Republic of Nigeria (OFR), by His Excellency, Umaru Yar’Adua (of blessed memory) President and Commander in chief, Federal Republic of Nigeria on 22nd Day of December 2008.

His Lordship will retire on 1st October 2019.