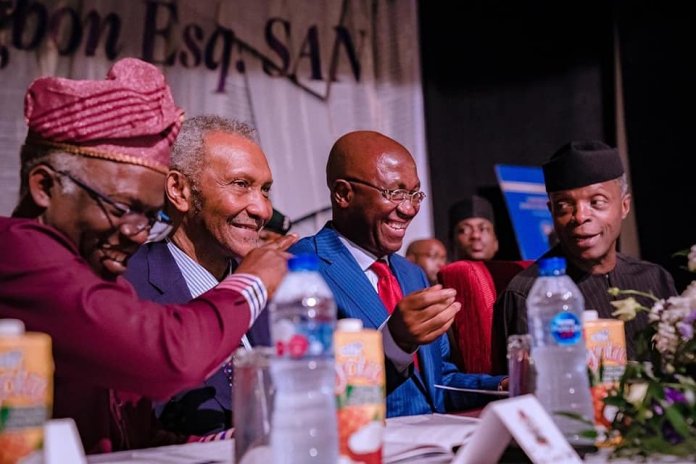 Falana stated that the bill, which proposes the death penalty for offenders, is barbaric in this modern age.

He made the statement during the memorial book launch of ‘The Sasegbon’s Judicial Dictionary of Nigerian Law,’ at Muson Centre in Onikan, Lagos.

He said that the introduction of the bill is a manifestation of legislative indolence as there are several laws addressing the issue they seek to criminalise.

“Nigeria already has laws that made very tough provisions for hate speech and I am talking about the ‘Cybercrime Act’ amongst others, and right now many people are being tried under that act so I don’t think we need any other law,” he said.

He mentioned that several journalists are currently standing trial under the aforementioned law and that one of the charges against Omoyele Sowore is that he insulted the president when he granted an interview via Arise TV.

“As far back as 1983, the court of appeal has said in the case of Arthur Nwankwo Vs. the State, that anyone who feels offended by any publication would have to go to court and sue for libel.

“You can’t use the machinery of the government to harass citizens! I can assure you that the law will not stand and if it does, we will challenge it and Nigeria will be exposed to ridicule in the international scene,” he said.

Meanwhile Chief Wole Olanipekun (SAN) speaking about Deji Sasegbon noted that he made a major contribution to the development of the legal profession in Nigeria.

Olanipekun said his books have served as a reference point for lecturers, students and practitioners.

“Most lawyers that are erudite in the profession depended on Sasegbon’s publications, and I am very happy that his wife made maximum sacrifices to complete the dictionary which is up to volume 7,” he said, adding that the late Sasegbon was and is still a role model to legal practitioners.

“While alive, he was hardworking, diligent and selfless, and he was a man that gave so much to humanity,” he stated.

Also, the vice president of Nigeria, Prof. Yemi Osinbajo (SAN) said the late Sasegbon was a very good friend of his, and that they spent numerous times together trying to find solutions to challenges facing the legal profession.

“I am proud to be a witness of the book lunch which crowned his efforts, and I also commend his wife who made it possible to complete the book from where he stopped,” Osinbajo said. However, the widow, Oge Sasegbon said the book is the first legal dictionary with a Nigerian author, which aims to reduce Nigeria’s legal dependence on foreign authorities.

Oge explained that the book is very defining and explanatory with regards to several legal terms that have been quite difficult to define, such as jurisdiction.