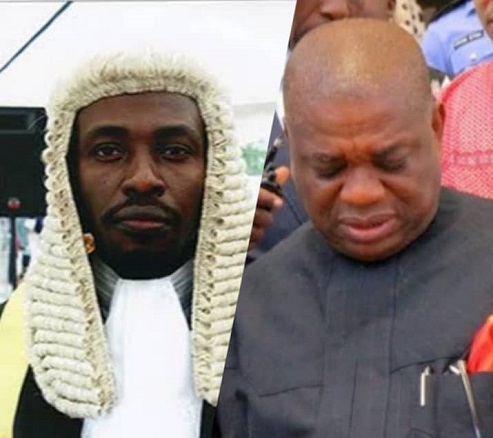 Justice Mohammed Idris formerly of the Federal High Court in Lagos, Monday, informed parties that he has been authorized by fiat to conclude the fraud trial of a former Governor of Abia, Orji Kalu.

Kalu was charged before Idris on an alleged N7.2billion fraud brought against him by the Economic and Financial Crimes Commission (EFCC).

The EFCC is prosecuting Kalu, his former Commissioner for Finance, Jones Udeogu, and his company, Slok Nigeria Ltd, on an amended 39 count charge of fraud-related offences.

The charges were, however, subsequently amended, and the charges increased to 39 counts.

Justice Idris, had presided over trial in the suit but was subsequently elevated to the court of Appeal.

In spite of his elevation, he was issued a fiat to continue trial of Kalu but the fiat expired in November 2018.

Meanwhile, President of the Appeal court on July 8, issued a fresh fiat for Justice Idris to return and conclude the trial.

Without a renewal of the fiat, Justice Idris who now sits on appellate jurisdiction cannot continue his sitting in the lower court.

When trial resumed on Monday, Mr Rotimi Jacobs,SAN, announced appearance for the EFCC while Mr Awa Kalu, SAN, appeared for the first defendant and was the only defence counsel appearing on record.

Justice Idris then said “Just to brief counsel that by a fiat dated July 8, the president of the court of Appeal has directed that I conclude this part-heard matter; trial will now run from day to day until we finish,”

According to him, after receiving the hearing notice, he had informed the court of his inability to attend following his participation in the election petition matters, which are constrained by time.

He said that the constitutional timing for election petitions cannot be extended by any court, adding that even counsel to the second and third defendant were not in court.

He told the court that he had to personally run to Lagos to make explanations adding that the case file was not also in his possession.

After explaining all his constraints, he prayed the court to grant an adjournment to a later date.

Responding, the prosecutor insisted that the defence opened its case for some progress to be made before an adjournment is granted.

Defence counsel in reaction agreed to open its case but said that it should be on record that the defendant will give evidence from the dock instead of the witness box.

In the dock, Kalu was not sworn on oath, and he began his evidence.

Defence asked him to tell the court his name, address and occupation.

In response, the defendant introduced himself as Orji Uzor Kalu, and said that he resided at No. 5 Queen Amina, Asokoro, Abuja.

On what he does for a living he said “About few weeks ago, I was a Manufacturer of home goods but now a Senator of the Federal Republic of Nigeria,”

According to him, “Home goods like Maggi and Tomatoes,”

He confirmed that he was standing trial on the criminal charge and had pleased not guilty to same.

Kalu also confirmed that he was standing trial alongside two other co-defendants.

At this point, defence told the court that he was totally handicapped to continue with examination, and sought an adjournment. Prosecution did not oppose this request.

The court consequently, adjourned the case until Aug. 26 for continuation of trial by 10a.m., adding that trial will be proceed on daily basis until the case ends.

Meanwhile, on the request of prosecution, Idris also issued hearing notices to second and third defence counsel to be present at the next court sitting.

The News Agency of Nigeria (NAN) reports that on July 31, 2018, Justice Idris had dismissed a ‘no-case submissions’ made by the defendants and had ordered them to open their defence.

The defendants later challenged the jurisdiction of the judge to hear the case, arguing that he was no longer a judge of the high court.

They also filed an application seeking a stay of proceedings pending the outcome of their appeals.

The judge had also ordered him to submit himself to the EFCC within 24 hours of his return to the country.

On Jan. 23, when the case last came up in court, the prosecutor again complained of Kalu’s repeated absence from court, alleging that he was taking the court for a ride, in spite of clear court orders.

Prosecution had urged the court to continue the hearing in Kalu’s absence.

But in response, Justice Idris said he could not proceed with the case as the fiat given to him by the Appeal Court President had expired.

Idirs has now been given a new fiat to conclude the case.

In the charge, the defendants were alleged to have committed the offence between August 2001 and October 2005.

Kalu was alleged to have utilised his company to retain in the account of a First Inland bank, now FCMB, the sum of N200 million.

The sum is alleged to have formed part of funds illegally derived from the coffers of the Abia State Government.

In one of the counts, his company (Slok Nig Ltd) and one Emeka Abone who is said to be at large, were also alleged to have retained in the company’s account the sum of N200 million, on behalf of the first accused.

In counts one to 10, the accused were alleged to have retained about N2.5 billion in different accounts, which funds were said to belong to the Abia State Government.

Cumulatively, in all the counts, the accused were alleged to have diverted over N7.2 billion from the Abia State government’s treasury, during Kalu’s tenure as governor.

It also contravenes the provisions of the Money Laundering Act of 1995 as amended by the amendment Act No.9 of 2002 and section 477 of the Criminal Code Act, Laws of the Federation, 1990