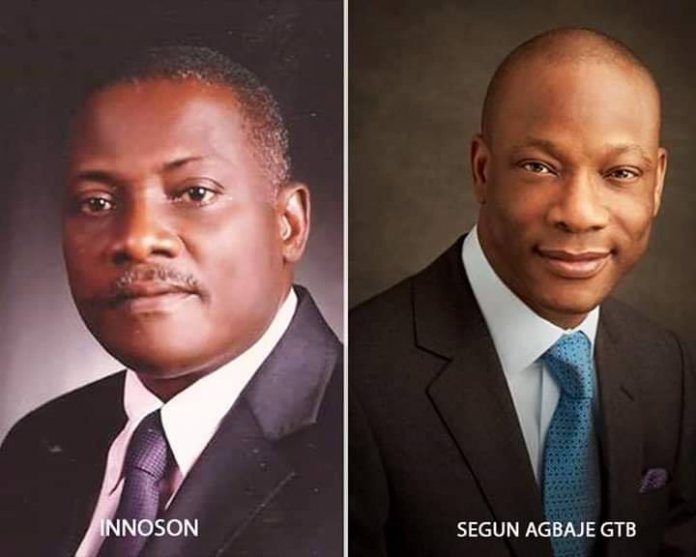 Innoson Nigeria Limited has asked a Federal High Court sitting in Awka, Anambra State to order the physical appearance of the Managing Director of  Guaranty Trust Bank  Segun Agbaje and Its Chairman Mrs. Osaretin Demuren and its Company Secretary Erhi Obebeduo to show cause why the should not be committed to Prison for contempt.

The above is contained In a press release issued by the Head Corporate Communications Innoson Group Cornel Osigwe. According to Osigwe:

“The Managing Director of Guaranty Trust Bank Segun Agbaje, Its Chairman Mrs Osaretin Demuren and the Company Secretary Erhi Obebeduo are set to physically appear before the Federal High Court Awka to show cause why they should not be committed for contempt and sent to prison for their willful, deliberate, wanton and unlawful violation of the subsisting Orders of the Supreme Court, Court of Appeal and the Federal High Court, Awka division and or for interfering with or obstructing due administration of Justice as epitomized by acts of hooliganism, thuggery, extreme lawlessness and condemnable impunity exhibited by them on the 29th and 30th of March, 2019 and on the 1st of April 2019.”

Osigwe further accused  GTB of breaking into all its properties which have been distressed and seized by the Court bailiffs/sheriffs while executing a writ of fifa issued by the Court. Cornel described this as “acts of thuggery, extreme hooliganism and outright lawlessness”

He further noted that “Prof McCarthy Mbadugha ESQ had obtained from the Court the requisite leave and necessary process for levying execution- the writ of fifa against GTB who failed to obey the Supreme Court and Court of Appeal’s Order affirming the Garnishee order absolute issued by the Federal High Court Ibadan in Suit No: FHC/L/CS/603/2006- ordering the bank to pay Innoson Nigeria Ltd the judgment sum of N2.4 Billion with a 22% interest, per annum, on the judgment sum until the final liquidation of the judgment. The Judgment debt of N2.4Billion has an accrued interest of over N6.7Billion as at today, thereby resulting in the total outstanding judgment debt being over N9 Billon as at today.”

Innoson Nig Ltd through its counsel Prof McCarthy Mbadugha Esq in its Motion on Notice seeks  the following reliefs among others;

– An ORDER of this Honourable Court commanding and or mandating the appearance of the cited parties on a day, date, time and venue as may be deemed fit by this Honourable Court to physically appear and show CAUSE why they should not be committed for contempt and sent to PRISON for the wilful, deliberate, wanton and unlawful violation of the subsisting Orders of this Honourable Court and or interfering with or obstructing the court’s due administration of Justice as epitomized by acts of hooliganism, thuggery, extreme lawlessness and condemnable impunity as exhibited on the 29th and 30th of March, 2019 and on the 1st April, 2019.

– AN ORDER that the acts of thuggery, extreme hooliganism and outright lawlessness of the garnishee/debtor and or the parties cited in this application in breaking into all the properties of the garnishee/debtor distressed, attached and seized by the bailiffs/sheriffs of the Honourable Court pursuant to a writ of fifa issued by the Honourable Court for that purpose and retrieved those properties, undistressed as well as released them from attachment and or seizure amounts to a grievous contempt of this Honourable Court of the worst specie.

– AN ORDER that the acts of thuggery, extreme hooliganism and outright lawlessness of the cited parties in obstructing and in stopping the Sheriffs/bailiffs of the Honourable Court from attaching, seizing and distressing the properties of the Garnishee/Debtor amounts to wilful and contemptuous violation of the subsisting orders of this Honourable Court as well as obstructing and interfering with the course of justice and due administration of justice.

– AN ORDER denying the Garnishee/Debtor, the cited parties – contemnors – or any other person affiliated or related to them, their counsel further or other audience or an opportunity to seek judicial intervention or palliatives before this Honourable Court – or any other Court of the Federal High Court until they purge themselves of contempt.

DPP’s Advise: Alleged Killer of Kolade Johnson to be Arraigned in...