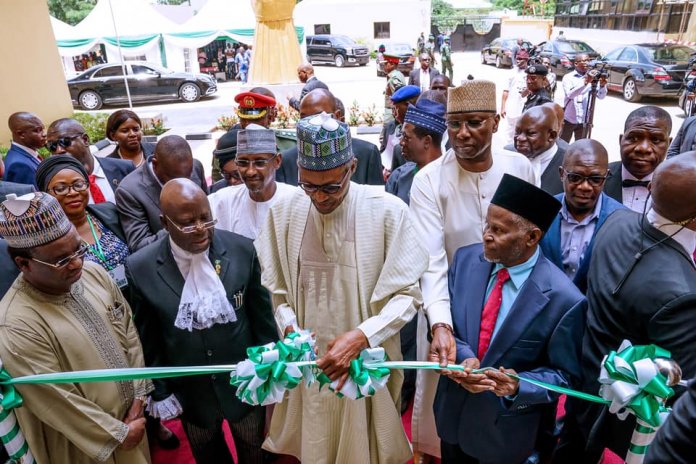 The President of the National Industrial Court of Nigeria, Justice Babatunde Adejumo, has appealed to President Muhammadu Buhari to allow the appointment of more judges in the country.

Justice Adejumo made the call in Abuja at the inauguration of the annexe building of the headquarters of the court. The event was attended by President Buhari, the Chief Justice of Nigeria, Tanko Muhammed; the Secretary to the Government of the Federation, Boss Mustapha; and other top officials from the three arms of the government.

Justic Adejumo said the appointment of more judges would enable for speedy dispensation of justice, as many cases are pending before the over 1,000 judges in the country.

“As we speak, we have 1,200 justices and judges all over the country, starting from the Supreme Court to the trial courts and this is why people believe strongly that there is justice delay in the courts.

“This is never the fault of the judges. Some of our judges are dying because they are being overworked. Some of them when they retire, they don’t enjoy their retirement because they have been overworked. If a judge has 1000, 500 or 250 cases before him, the best any judge can do is to treat about 80-100 cases in a year and that judge is extra-ordinarily hardworking.

“The issue of delay will never stop, from my experience of about 25 years, except, with due respect Sir, (referring to the President) the Judiciary is allowed to double its strength. Sir, approval should be given to the Chief Justice of Nigeria to appoint more judges across the board, so that justice can be delivered without delay, for ‘justice delayed is justice denied.”

Justice Adejumo, whose tenure at the National Industrial Court is ending soon, also requested for more infrastructure for the judiciary, to enhance its efficiency.

“If more judges are to be appointed, then infrastructure has to be made available: courtroom, chambers, houses, cars, etc. This is why I have humbly said that the Judiciary should be considered when it comes to funding and the National Assembly should also cooperate,” he said.

Justice Adeyemo lamented that the Industrial Court currently has 33 judges with over 10,000 cases pending before it.

Also speaking, the Chief Justice of Nigeria, Tanko Muhammad, said the inauguration of the building was historic because it provides the court with a conducive working environment.

Justice Muhammad thanked President Buhari for making funds available for the Judiciary. He, however, appealed for more.

The occasion was attended by the Secretary to the Government of the Federation, ministers of Justice and the Federal Capital Territory, as well as the Chairman of Senate committee on judiciary, Opeyemi Bamidele.

Shortly after inaugurating the building, Mr Buhari was conducted round the facility by Mr Adejumo.