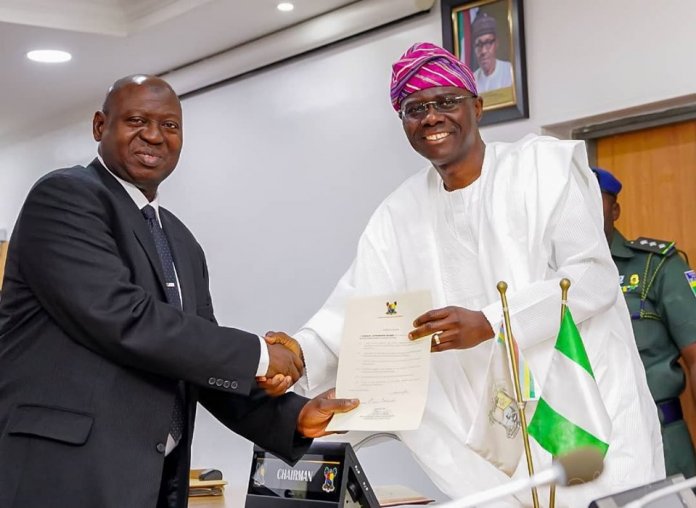 The swearing-in ceremony took place at the Lagos House, Alausa, Ikeja; Alogba has served in acting capacity for almost three months and was confirmed by the state Assembly on Tuesday.

Speaking after the oath-taking ceremony, the governor said his assumption of office as the substantive CJ will bring a new and glorious chapter in the history of justice administration in Lagos state and ” will further consolidate and advance the cause of justice delivery for the benefit of all”.

Sanwo-Olu assured the CJ of the total support and cooperation of the Executive because a greater Lagos which is the dream of his administration can not be achieved without an important and independent judicial system.

“The task before us is to build on the achievements that have brought accolades to the states’ judicial system and I have no doubt that you have what it takes to move Lagos to the desired height”, Sanwo-Olu told Alogba.

According to the governor, Lagosians expect so much because “everything we have now is brand new, brand new administration with a brand new governor, Chief Judge, Exco, 9th House of Assembly, everything is new with new visions, competence, energy, zeal etc.

“You are a very credible individual who has been part of the landmark reforms in the state judiciary and the goal is to ensure speedy delivery of justice and expansion of the judiciary; we must continue to pursue that objective because it is the only way of assuring the citizens of our desire to make life better for all”.

Sanwo-Olu assured the Chief Judge that he has taken note of all his request to put the judiciary in a better standing to deliver, promising the request will be attended to within the available resources.

“The citizens are expecting so much from us and I believe Lagosians will get things that have never happened before because we are brand new”.

The governor assured that the three arms of government will work resolutely together and will not shy away from delivering dividends of democracy to citizens, and “Lagosians, Nigerians and Africans will be better for it.

“We want you to take Lagos judiciary to a height never seen before and in doing this we shall give you all the necessary support and together we will all see smarter Lagos”, Sanwo-Olu said.

In his vote of assurance earlier, Alogba thanked the governor “because I consider myself fortunate to be sworn-in by a brand new and quintessential governor and also screened by a veteran speaker and presented by a new Attorney-General and Commissioner for Justice.”

He promised to work relentlessly with others to ensure he provides world-class standard administration of justice system in the state and also “work with your administration to ensure goals of the administration are achieved to make Lagos greater”, Alogba said.

The Chief Judge promised to pursue vigorously prison decongestion and ensure that inmates come out better and not worse.

Alogba promised to pursue zero tolerance on corruption, promising to fight corruption to the last.

“We will put necessary facilities in place for the administration of justice in the state, we also intend to improve on administration of criminal justice and also take all steps to ensure that human rights as enshrined in the constitution are protected”.

“I shall key-in to the aspiration and goals of the administration to ensure we have a smart judiciary by deploying information and technology facilities in rendering our services”.

He further promised better welfare for staff and to pursue vigorously staff training and skills acquisition for all category of staff saying an unhappy workforce can not achieve anything and without training nothing can be done.

He also solicited for more judges saying the workload on the present few judges was too much which is responsible for a huge backlog of cases pending in the courts.

He appealed to the governor for assistance in addressing all the demands and all that he wants to do to put the judiciary in a better standing.