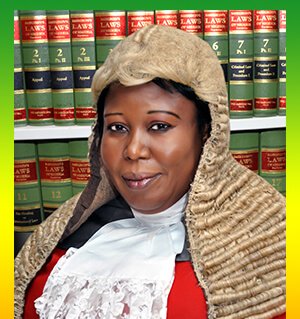 Performing the ceremony Wednesday afternoon at the banquet hall of the Gombe State Government House, Governor Muhammad Inuwa Yahaya expressed his administration’s desire to maintain the harmonious working relationship with the judiciary and legislature.

He assured that despite the financial difficulties faced by the state, his government would be committed to improving the general working conditions of the judiciary which he outlined as lacking in sufficient court buildings which has made over 50 per cent of the courts to operate in very old and highly dilapidated rented buildings with obsolete furniture and equipment.

He told the acting Chief Judge that while discharging her constitutional duties bestowed on her, to dispense justice to all manner of people in the state, no person should be discriminated against by virtue of his ethnic origin, race, creed or religion.

He described her as respectable and deserving of the exalted office adding, “No doubt, her dedication, experience, principled posture and forthrightness makes her an asset not only to judiciary, but the entire state and the country as a whole.”

Earlier, a valedictory court session was held for the immediate past Chief Judge, Justice Hakila Y. Heman, at the State High Court where the governor described him as a legal icon who has contributed immensely to the development of the legal profession and the socio-economic development of Gombe State.

He said the contributions of Justice Hakila to the development of Gombe State would always remain indelible in the minds of the people as he would be remembered as an honest, sincere, righteous, hardworking and patient Judge.

Why NBA-NEC Suspended Bayo Akinlade as Chairman of Ikorodu Branch