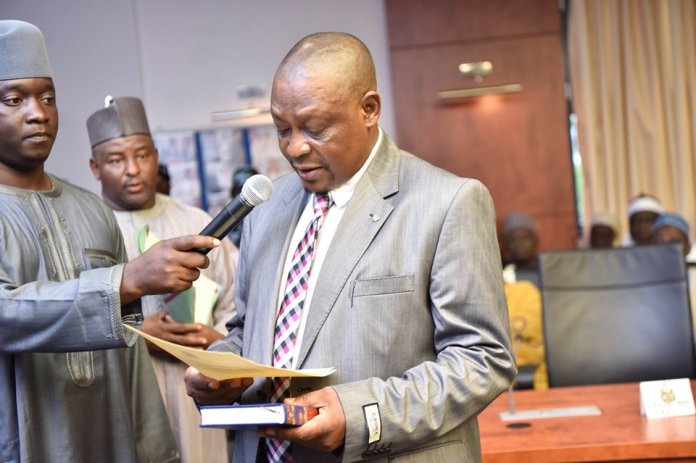 The Kaduna State House of Assembly yesterday screened and confirmed Justice Muhammad Lawal Bello as the chief judge of the state.

He was born on 24th April, 1957 in Lere local government area of Kaduna State where he obtained his primary education between 1963 and 1968.

Before he obtained his certificate from the prestigious Ahmadu Bello University (ABU) between 1977 and 1980, he went to Katsina College of Arts, Science and Technology between 1974 and 1977. Justice Lawal attended Nigerian Law School Lagos between 1980 and 1981.

Until his confirmation, Justice Muhammad has worked in various places between 1975 and September 1, 2018 when he was appointed the acting chief judge of Kaduna State.

While deliberating on the floor of the house, one of the members who is also a Barrister, Mr Kantiok Irmiya Ishaku representing Zonkwa constituency said confirming him as the chief judge of Kaduna State would be of great service to the state.

Hon Kantiok noted that his wealth of experience and exposure to legal administration would bring the needed cooperation between the executive, the legislature and the judiciary.

Speaking with newsmen shortly after his confirmation, Justice Muhammad said that as someone who has passed through most offices of the judiciary and has identified the problems in the judiciary, he would by the grace of God proffer solutions to the problems facing the judiciary.

He also said that he would ensure that the congestion in the prisons are reduced through granting bail in cases that are bail-able.

Meanwhile the house also received a letter from the executive requesting it to remove from office two commissioners who were found wanting and participated in partisan politics.

The speaker directed the clerk of the house to convey the resolution of the house to the executive governor of the state, Mal. Nasir El-Rufai that the two commissioners have been removed for misconduct.