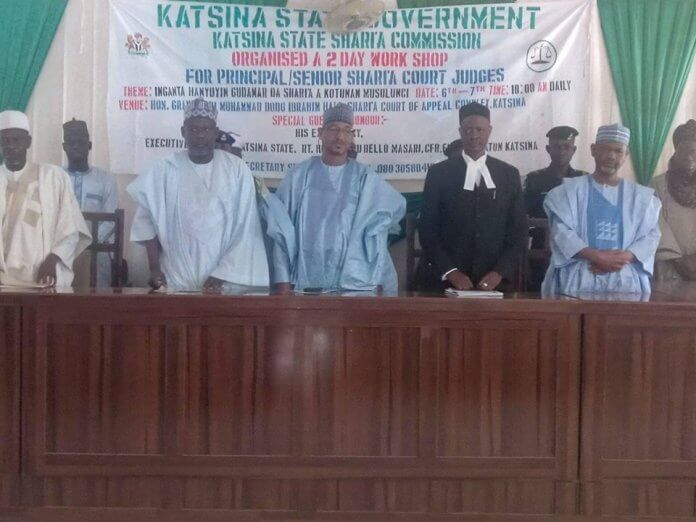 Danladi gave the warning on Wednesday in Katsina at the opening of a two-day workshop for Principal/Senior Shari’a Court Judges, organised by the State Shari’a Commission. “Judges should avoid corruption because the CJ and Grand Khadi will not spare any judge found wanting. “You should understand that you have a lot of burden on you, whenever a case is brought before you, try to do justice on what is clear to you,” he said.

He, however, said that the judiciary was faced with some challenges including inadequate number of judges to handle cases as well as increasing population in the state. “We know that there are lots of cases pending before courts.

“Yet, people should continue to go to court to seek for their rights rather than taking the law into their hands,” he said.

In his remarks, the Grand Khadi, Al-Hafiz Mika’il, commended the State Government for supporting the Shari’a Commission, which assisted immensely in uplifting the Shari’a law in the state.

Mika’il said that the commission would set up a committee that would screen preachers preaching in congregations like market places and other forms of gatherings. Also speaking, the State Attorney-General, Mr Ahmad El-Marzuq, urged judges to intensify efforts toward dispensing justice to the people without fear or favour.

“You should remember the oath you have made that you will be fair to all without fear or favour while discharging your duties,” he said.

El-Marzuq, who represented Gov. Aminu Masari, said that the new Penal Code Laws are currently operational in the state. He added that the Administration of Criminal Justice Act (ACJA) has also been domesticated and implemented in the state.

He commended the cordial working relationship between the legislative, executive and judicial arms of government.

The Shari’a Commission’s Secretary, Alhaji Magaji Liman, explained that the workshop would provide additional knowledge to the judges in the course of their duty. He therefore urged them to pay attention and learn what they would be taught during the workshop.

Court of Appeal No Longer a Dumping Ground for Those Seeking...