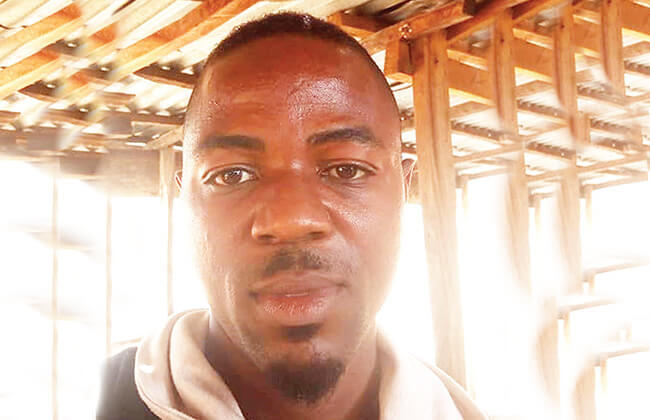 Kayode Bello, an alumnus of the University of Ibadan who became popular when he stood up against the authorities of the Nigerian Law school on the living condition of law students and was expelled is stirring up another round of activism.

This time around, the law graduate has accused the Chairman of the House of Representatives Committee on Public Petitions, Mr Uzoma Nkem-Abonta, of assault.

He also said that he was detained for about four hours by policemen attached to the National Assembly.

Bello, who petitioned the National Assembly over alleged extortion and indiscriminate refusal by the United States embassy to grant visas to Nigerians, told our correspondent that since his release on bail, he had been in and out of the hospital.

The 35-year-old claimed that Nkem-Abonta’s grouse with him was that a summons to the US Ambassador to Nigeria over his petition was published by The PUNCH.

The lawmaker allegedly said the publication embarrassed the National Assembly.

However, when our correspondent contacted Nkem-Abonta, he denied the allegations.

Our correspondent had reported that many Nigerian students, who applied for visas at the US embassy, had their applications turned down, thereby losing the fees paid to their prospective schools.

Bello, a Law graduate, had said he was also unjustly denied a visa to the US, where he was to present a paper on climate change at the University of California.

He had petitioned the National Assembly through a member representing the Ede and Ejigbo Federal Constituency of Osun State, Prof. Mojeed Alabi.

He claimed that when he petitioned the Foreign Affairs Ministry and the Consular General of the United States Embassy in Nigeria, he did not get any response.

The researcher had asked the government to investigate the alleged extortion of Nigerians by the embassy through non-refundable visa fees.

Two summonses were reportedly sent to the US embassy by the House committee, as hearing was slated for December 4, 2018.

However, Bello said when the embassy’s representatives did not show up, the hearing was shifted to December 18, 2018, as it was announced that the Minister of Foreign Affairs would also be invited.

Due to the strike action embarked upon by the National Assembly workers, the hearing was stalled.

An affidavit that Bello swore to at the Federal High Court, Abuja, read in part, “Earlier, Mr Omale Adoyi (clerk of the committee) called me that I should bring a copy of The PUNCH that reported the summons by the National Assembly to the American ambassador.

“On January 10, 2019, I went to the National Assembly for a follow-up on the petition, but on getting there, Mr Adoyi asked me to follow him to the office of the Chairman of the Committee on Public Petitions and I followed him.

“Upon arrival at the chairman’s office, the man accused me of reporting about the summons to the US ambassador. I told him that the summons was reported by The PUNCH, The Guardian and ThisDay, and that I only gave them the information needed for their reports and that The PUNCH contacted the clerk before publishing the story.

“The chairman said I was a daft person and that I should have known that the House committee could not summon the US Ambassador to Nigeria. He shouted at me and asked me to leave his office and said the committee would not handle my petition anymore. He said he would deal with me if I reported what transpired in his office that day.

“The chairman then opened the door via a remote control, but as I was making my exit out of his office, he dragged me back and punched me in the face. He said he had all the money to deal with me.”

Bello said when he became dizzy due to the assault, the chairman called security personnel to take him away.

He said his health condition, which was unstable before the assault, had worsened.

Bello claimed that he was detained at the police post attached to the National Assembly, where he made a statement, adding that his phone was seized.

“I was released on the grounds that the chairman, who asked that I should be arrested, did not make a formal complaint to the police or write any statement, and the witness, Mr Omale Adoyi, could not substantiate any allegation against me. I am presently receiving medical treatment at the General Hospital, Maitama,” he added.

Our correspondent was told that the National Assembly had withdrawn the summons to the US ambassador.

Nkem-Abonta, in a telephone chat with our correspondent, denied the allegations, saying he was not aware of the summons to the ambassador.

He also said he was on vacation when Bello barged into his office to demand a written address.

Nkem-Abonta stated, “He walked into my office; I did not invite him; and he said I should give him a written address. I told him that I was on vacation and I asked him to leave my office and invited the sergeant-at-arms to take him away.

“No story can embarrass me. He embarrassed himself. Is it not common knowledge that no assembly anywhere can summon an ambassador? I did not issue any summons. Was my signature forged or what? I don’t know. I constituted a panel to find out who summoned the ambassador. I am so experienced to know my limits. I don’t know him and nobody attacked him.

“The clerk was relieved of his duty because of that matter. He is no longer the clerk; are you not aware? I did not sign any summons and I don’t know who did. I only read in the paper and I asked to find out and I reported to the authorities.

However, a policeman involved in the case said Bello was blameless in the matter, adding that the committee chairman only vented his anger on him.

The cop explained, “He (Bello) went there to get feedback when the honourable chairman picked offence and said he had come to embarrass him in his office. Unknown to him, the clerk was really at fault. He (Nkem-Abonta) picked offence and transferred his aggression to the man.

“He referred Bello and the clerk to us. After listening to the clerk and Bello, we did not see any reason to detain him, so we decided to release him. We asked him to return the following day so we could thrash out the matter.”

He said Bello’s telephone was seized in order to ensure that he returned the following day since he had no one to take him on bail.

The policeman added that the activist had, however, refused to return to the station since he was released.

When our correspondent contacted the clerk, he asked him to come to Abuja.