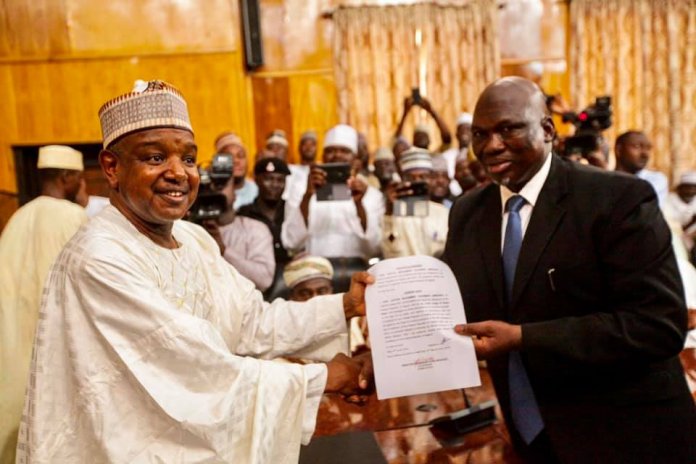 His Excellency, Governor of Kebbi State; Senator Abubakar Atiku Bagudu today swore in Justice Mohammed Sulaiman Ambursa as the new acting chief judge of the state, following the rejection by the house of assembly of Justice Asabe Karatu on grounds on certificate altercation.

Giving his address, Governor Bagudu congratulated the new acting chief judge of Kebbi state and prayed for Allah’s guidance to help him rule the judiciary properly. He also seized the opportunity to tackle they rumors making rounds on various social media platforms that Justice Asabe Karatu was rejected by the assembly based on grounds of her religious beliefs and affiliations, backing the earlier press release by the speaker state house of assembly, Hon. Sama’ila Abdulmuminu Kamba, that Kebbi state is a land of equity and does not discriminate on grounds of ethnicity or religious affiliations in the appointment of office holders.

He stated that she was rejected due to an altercation in the date of birth on her primary school certificate by they members of the state assembly despite his pleas and writing to them 3 times to reconsider and appoint her acting chief judge. He made it known that the appointment of a new chief judge was totally in the constitutional jurisdiction of the state house of assembly, as he was only to recommend a judge to them.

Justice Mohammed Suleman Ambursa was born on the 25th Dec, 1957 and attended Usman Danfodio University, Sokoto where he was best graduating student. He taught in various primary and secondary schools, before proceeding to the judicial sector where he rose through the ranks to where he is today due to his commitment to fairness and equity of the judicial system.

We Must Adopt Proactive Strategies in Fighting Corruption – NBA President