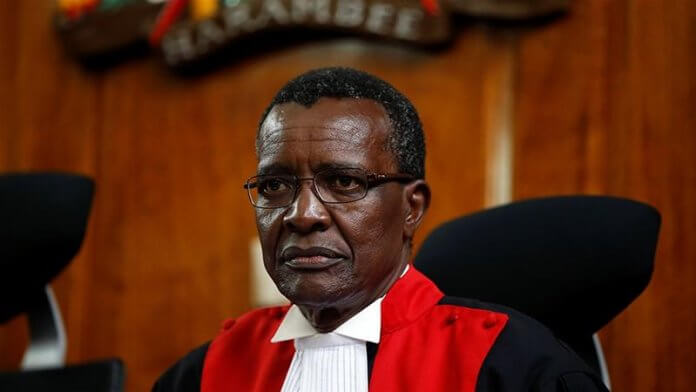 Kenya’s chief justice lashed out on Monday at budget cuts that he said were intended to undermine the court system and would hamper an anti-corruption drive.

David Maraga, who angered President Uhuru Kenyatta’s government as head of the Supreme Court in 2017 by overturning Kenyatta’s re-election and forcing a re-vote, said some courts had stopped working and a drive to speed up corruption cases was on hold.

“A number of critical processes in the courts and the judiciary will be severely crippled,” he said in a televised news conference.

“Some of the incidents that we encounter are deliberate attempts to undermine the judiciary … I am not serving at the pleasure of a few people in the executive who are bent on subjugating the judiciary.”

A former finance minister and hundreds of other senior officials and business people have been charged under a high-level corruption crackdown launched last year. None of the cases have been concluded, however.

The judiciary was allocated 18.9 billion shillings ($183 million) for the fiscal year starting in July, well below the judiciary’s request for 33.3 billion.

Maraga said money for salaries remained the same, but the development and recurrent expenditure budget had been halved.

Maraga said a plan to automate some proceedings in special new anti-corruption courts in Nairobi was now on hold, and that judges should not be blamed if corruption trials are derailed.

Circuit courts of appeal in Nairobi, Mombasa, Nakuru, Eldoret and Nyeri had been suspended and 53 mobile courts working in remote areas had also stopped working owing to lack of money for vehicles and fuel.

Mercy Wambua, chief executive of the Kenya Law Society, said the judiciary was under more pressure than at any time since Kenya returned to multi-party democracy in 1992.

“All the gains we’ve made since democracy to improve access to justice are being eroded,” she said. “We’ve been sent back several years in terms of reforms.” ($1 = 103.2000 Kenyan shillings)