Home News Lagos 2019 Court Rules: Why Lawyers are Against Implementation 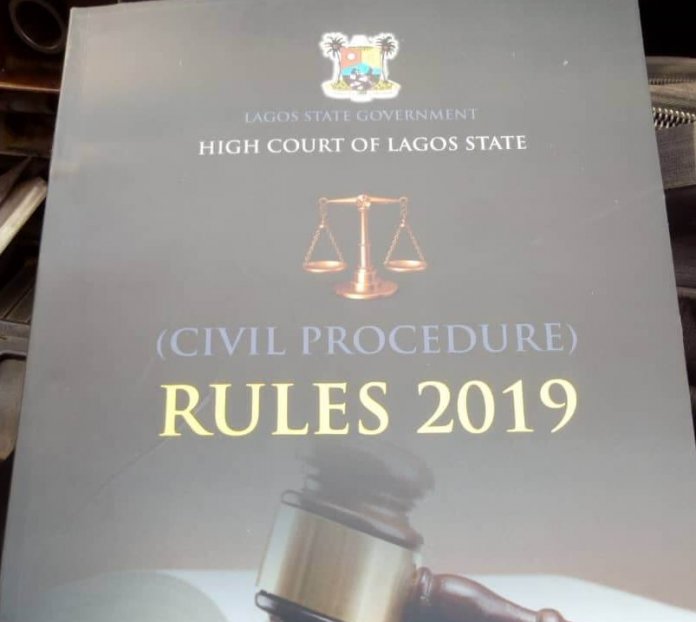 Reactions have continued to trail the launch of the High Court of Lagos Civil Procedure Rules 2019, with some lawyers hailing the development and others showing resentment.

The Rules were launched by Justice Opeyemi Oke, the Chief Judge (CJ) of Lagos State on Monday in Ikeja.

Oke had said that the aim was to enhance justice delivery, adding that the Rules were in line with international best practices.

The News Agency of Nigeria (NAN) reports that the Ikeja Branch of the Nigerian Bar Association (NBA) led by Mr Dele Oloke had on Monday kicked against the Rules, claiming that lawyers were not involved in its development.

The NBA branch described as unrealistic, fines to be imposed on erring lawyers under the new Rules.

Mr Monday Ubani, a former Chairman of the branch, on Wednesday described the 2019 Rules as an improvement on the 2012 Rules but frowned at the alleged non-participation of NBA branches in the establishment.

“When the CJ announced the provision of the new Rules at a stakeholders’ meeting, she said she needed input from the NBA branches.

“Following that development, the committee wrote to the CJ to make the same request and that letter was also not responded to,” he said.

Ubani said that NBA, Ikeja Branch, was not opposing progressive sections of the Rules but were dissatisfied with the fines and non-inclusion of members of the bar in the creation of the Rules.

“In the Rules, lawyers who delay trials are to pay a hefty amount into the treasury.

“Meanwhile lawyers come early to court and find out, without prior notice, that the judges are not sitting, and they bear the brunt.

“If the fines are to ensure that lawyers are to be up and doing in the administration of justice, what of the side of the bench? What are the penalties for judges who do not sit?” he said.

According to Ubani, under the new Rules, if a lawyer filed pleadings out of time, he will pay N2,000 everyday.

“Who pays it? Would litigants pay if for a good reason they have to file out of time?

“These are the reasons lawyers wanted to make input but they were denied the opportunity when they were not given a copy of the Rules to preview,” Ubani said.

Mr Wale Ogunade, a lawyer and President, Voters Awareness Initiative (VAI), a non-governmental organisation, told NAN that Ikorodu, Lagos and Ikeja NBA branches should have been involved in the development of the new Rules.

“Justice should be two-sided. If filing fees and other sundry rates are high, people will no longer resort to the courts.

“I am an active member of the Ikeja Bar which is the foremost bar in Lagos; if the Ikeja Bar is not carried along, I do not know how the Rules will work.

“Judges were the only ones involved in the development of the Rules; because of its punitive nature, lawyers may as a result, stop going to court,” Ogunade said.

Mr Bayo Akinlade, the Chairman of the Ikorodu Branch of the NBA, however, lauded the launch of the new Rules, noting that it was six years since the last review of High Court of Lagos Rules.

He urged that the Rules should bring about development of jurisprudence.

“The new Rules seek to make justice delivery faster; the cost of litigation is not high compared to the time it takes to litigate.

“These new Rules not only reflect the rate of inflation but also attempts to discourage lawyers who specialise in delaying cases and wasting the time of the courts while reaping the benefits from their clients.

“The fine is not necessarily for lateness but for any attempt on the part of a lawyer to delay the case.

“If you are to commence trial and you are not ready and your reasons are not good enough, the judge has the discretion to apply the rules.

“I don’t think I should have a problem with this as long as I am diligent in prosecuting my case before a judge. The courts are not a dumping ground for lawyers to just file something and forget it there until they are ready,” he said.

Akinlade disputed claims that lawyers were not involved in the process of establishing the 2019 Rules.

The NBA Ikorodu Branch chairman said that he was actively involved in the establishment of the Rules.

“I was part of the review as I offered my suggestions by submitting my opinion. I even submitted memoranda on behalf of lawyers who saw the calls for suggestions and responded.

“There was sufficient time for all lawyers and even the public to send their suggestions.

“If the position of the Ikeja Branch Chairman is to the effect that the NBA as an institution was not part of the Rules Committee, then that is another argument entirely, but lawyers were involved in the development of the Rules when they sent their suggestions,” he said.

He said that ADR was cheaper, easier and readily accessible to all.

The lawyer, however, said that ADR lacked enforcement connotations which made many litigants and their lawyers to prefer litigations.

“I prefer that ADR agreements should be made enforceable through an originating motion, and this should be done within a span of two months to three months so that the purpose of ADR will not be defeated.

“I mean the timing of coming to court to enforce an ADR agreement should not be more than two to three months.

Mr Valentino Buoro, an ADR advocate, told NAN that the inclusion of ADR into the civil procedure rules would decongest the courts.

“ADR does not make litigation invalid but the technicalities involved in court processes would be cut short.

“It will get experts other than lawyers to work in the justice system because ADR involves the services of other professionals who are knowledgeable in the matter in question.

“So ADR will bring lawyers and other professionals working together to reach a just and fair conclusion without basing issues only on legal technicalities,” Buoro said.

He, however, advised lawyers to acquire ADR training to ease their work while applying the process.