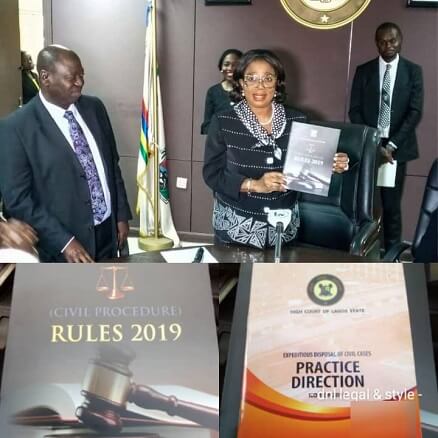 The Chief Judge of Lagos State, Honorable Justice Opeyemi Oke today launched the new High Court of Lagos State (Civil Procedure) Rules 2019 which enforcement will commence January 31. The event was held at the Conference Room of the High Court of Lagos state, Ikeja and had all the Honorable Judges of the State in attendance.
According to Justice Oke: “The principal target of reform therefore is to facilitate total justice delivery by ensuring speedy dispensation of justice and the restoration of public confidence in our judicial system”. She regretted that for a very long time,  excessive delay has been an embarrassing feature of the administration of justice adding, “the inadequacies in our Civil Procedure Rules and abuse of its provisions were identified as a contributory factor to the delay. A number of the procedures in the old rules could not meet the demands of modern civil justice and fell starkly behind international best standards”.
She explained that it became necessary to review the 2012 version of the Civil Procedure Rules to meet the obvious reality that in terms of efficiency, accessibility and effectiveness, civil justice delivery remained deficient. “It therefore became expedient to address these problems by introducing reforms directed towards the achievement of a just, speedy and efficient administration of justice in line with the Commitment Statement of this administration. A review was also essential to further reinforce the independence of the judiciary and address the lacuna identified in the 2012 Rules, to deny them as a tool exploited to defeat the ends of justice”.

Honourable Justice Oke explained that one of the reasons why the administration of justice in Lagos State has been highly revered is because of its leadership in international best practices reform. “The New Rules 2019 is in line with international best practices comparable with any global jurisdiction. The Rules also contain new Pre-Action Protocols on various subject matters to explain the conduct and set out the steps required of parties prior to the commencement of proceedings to which the Rules apply”.

The Chief Judge remarked that the new global Lagos cannot continue to endure delay and congestion in its Courts whether traceable to the Bar or the Bench adding, “justice delayed is quite simply an injustice and amounts to a denial of the right to fair hearing and casts the administration of justice in our jurisdiction in bad light both nationally and globally”.

She remarked that with the new court rules, local investors and Foreign Direct Investors (FDI) would be more attracted to a global Lagos which has an efficient and effectual rule of law-driven business environment. “The value and overriding objectives of the 2019 Rules are for a legal system that will strive to deploy scarce judicial resources wisely, run efficiently and effectively for the benefit of all people and not at the whims and caprices of any individual or any particular group of stakeholders”.
She said it was in this light and pursuant to the cumulative powers conferred on her by the provisions of Section 247 of the Constitution of the Federal Republic of Nigeria 1999 (as amended) and Section 89 (1) of the High Court Law of Lagos State, Cap H3, Laws of Lagos State to review Rules of Court, that the review of the 2012 Rules was kick-started last year and a 15-man Rules Review Committee was set up under the leadership of Honourable Justice Kazeem  Alogba.
To ensure an all-inclusive rules, Justice Oke said the committee notified and received contributions from all stakeholders including all the Nigerian Bar Association (NBA) branches in the State, the Body of Senior Advocates of Nigeria (BOSAN) for their input and that of stakeholders for their contributions and suggestions to be forwarded to the Rules Committee.
Oke chided groups which she said “have been less constructive and more off hand, founding reservations on the self-serving grounds that the efficiencies of new Rules which allow limited public resources to be employed in the overall public interest will be unfriendly and “run out of business” practitioners who are unwilling to make a good faith effort to adapt. She described such fears as “flimsy and appear to be self-serving and retrogressive in nature.”
She said: “The courts are created to serve the public and not incompetent or inefficient legal practitioners. Legal practitioners’ practice to serve the public and the system of justice and this is a professional and ethical responsibility.
“It is remarkable and intolerable that any legal practitioner should oppose efficiency and effectiveness in civil justice delivery in a perverted self-interest.
“The new rules are intended for the greater good of and the efficient and speedy dispensation of the greater number of cases and not to discriminately satisfy a few or any particular group of stakeholders”, she stressed.

Chairman of the review committee, Honourable Justice Alogba in a remark commended members of the committee for their meaningful contributions during the period the assignment lasted. He also thanked the Chief Judge for her support for the committee and for not leaving the job to them alone.