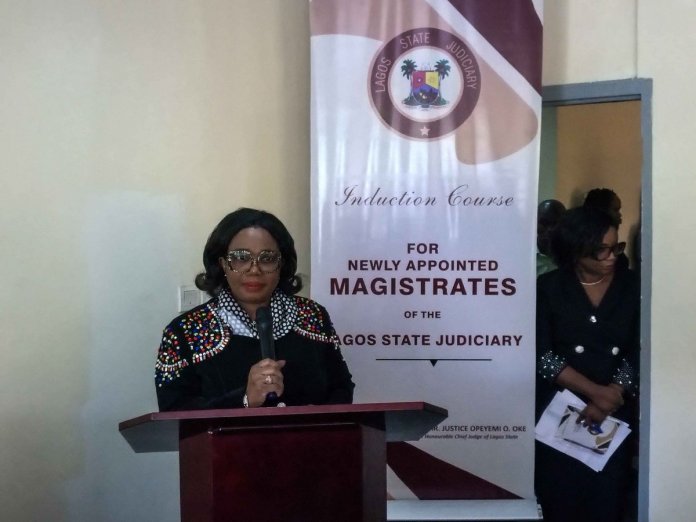 Lagos State Chief Judge, Honourable Justice Opeyemi Oke has admonished the newly appointed Magistrates in the State Judiciary to disregard all forms of interferences in the discharge of their duties, warning that such intrusions could jeopardize true judicial processes.

The Chief Judge gave the charge on Monday at the opening ceremony of the induction programme for the newly appointed magistrates at Lagos State Judiciary Training School GRA, Ikeja Lagos.

The programme according to her will equip the participants with relevant knowledge of being a precursor to the induction programme that will later be organised by the National Judicial Institute, Abuja for newly appointed Judges of the lower bench across the country.

“The induction programme is in satisfaction of the objectives and functions of the Institute as contained in the applicable provisions of the Lagos State Judicial Institute Law,” she added.

Speaking on the expectations of the legal profession from the magistrates, Justice Oke said that the magistrates are expected to be impartial arbiters in the temple of justice and should serve justice to all without fear, favour or being mindful of litigants’ social status or class.

In her words, “Judicial impartiality is a supreme judicial virtue that goes contemporaneously with judicial independence and these are some of the greatest attractions of the judiciary.”

She reminded the magistrates that the faithful performance of their duties is the bedrock on which peace, freedom, and order in any given society thrive, saying that when the society’s confidence in the integrity of the judiciary is unshaken, then the rule of law blossoms.

Justice Oke used the occasion to advise the magistrates to be up-to-date with the law and judicial decisions of superior courts at all times.

“Your life is now one of reading and writing and just a few moments to relax within the confines of judicial ethics. The importance of judicial competence cannot be overemphasized so you should have yourselves properly equipped for the job. Ensure you invest in good law books and a comprehensive compendium of cases, whether virtual or physical.

“Maintain a good rapport with your colleagues, respect for the individual is very key not just in the legal profession but very much also on the bench. If there are grey areas, please be humble enough to ask questions” she stated.