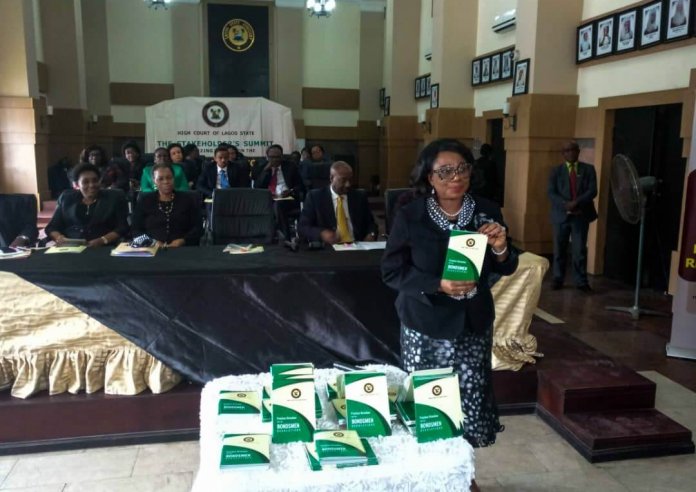 The Chief Judge of Lagos State, Justice Opeyemi Oke has called on interested individuals and corporate bodies to partner with the judiciary on actualizing the Bondsman scheme in the state.

Justice Oke made the call in her address delivered at a “Stakeholders’ Summit on Actualizing The Law on the Bondsmen and Recovery of Recognizance in Lagos State” where she stated that introduction of the bonds persons into the criminal justice system would make bail more accessible to anyone charged with a criminal offence.

lamented no individual or corporate body has applied to be licensed bondsman and bonds companies more than eight years after the Bondsmen Regulation of 2011 came into force in line with Section 138 of the Administration of Criminal Justice Law (ACJL).

The event also marked the inauguration of Practice Direction for the scheme.

Justice Oke described the bondsmen scheme as very laudable pointing out that it would assist defendants to obtain bail and ensure such persons can be produced seamlessly as and when needed in court.

She expressed confidence that the bondsperson scheme will significantly reduce prison congestion and other problems associated with same, while also ensuring that recognizance can be recovered in full where persons on bail abscond.

She encouraged interested individuals and corporate bodies to make necessary applications to join and partner with the Lagos State Judiciary on actualizing the scheme emphasizing that it has been proven in other jurisdictions that the professional bail bondsman brings important benefits to the society in which he works.

She explained that Section 138 (8) of the ACJL confers on the bondsperson the power of arrest should a defendant attempt to abscond.

She said: “Every Bondsperson shall have the powers to arrest any defendant or suspect who is absconding or who he believes is trying to evade or avoid appearances in Court: if he cannot bring the person arrested within 12 hours of the arrest before a Court, he shall hand the person arrested over to the Police who shall produce such person before the appropriate Court.

“The bondsman and the defendant form a contract in which the bail bondsman agrees, for a fee, to act as the defendant’s surety. In addition to paying the fee, the defendant agrees to appear in court for all scheduled appearances.

A ten-man committee headed by Justice Grace Onyeabo was set up February, 27 last year  with a mandate to find ways to actualise the recommendations of the Committee on Creation of Bondsmen and Recovery of Recognizance set up November 30, 2012.

In his lecture titled, “A Practical Approach to the Bondmen Procedure in the Justice System in Lagos State”, a bail bond expert and keynote Speaker, Dr Seyi Adetayo, remarked that bondsmen practice has not only helped defendants to access bail but also assisted low income group of the society to access justice.

Mr. Seyi Adetayo said despite the fact that the creation of bondsperson was necessary to eradicate unnecessary delays in the administration of criminal justice by ensuring that the defendant was readily available to stand trial and did not jump bail.

He however expressed concern that poor biometric authentication could frustrate the scheme.

Mr. Adetayo therefore called for synergy between the police and bonds companies to reduce the number of awaited trial persons as it would fast track trial and decongestion of the prison.

The highpoint of the event was the launch of the Practice Directions for the Bondsmen Regulations in the state.