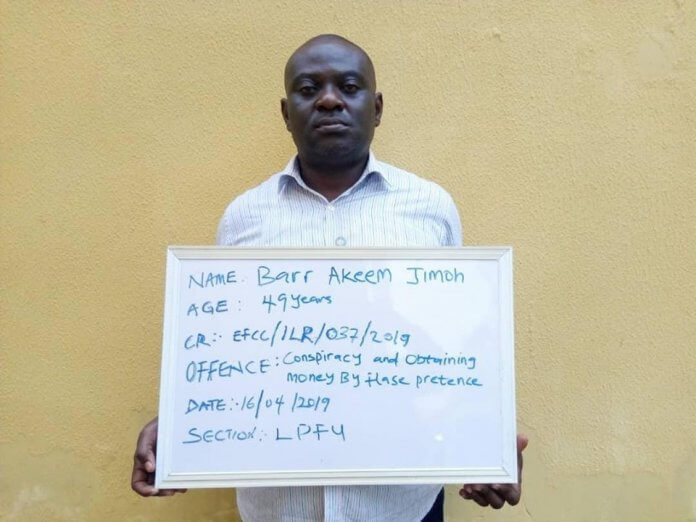 The Economic and Financial Crimes Commission, (EFCC), Ilorin Zonal Office has arrested a legal practitioner, Akeem Jimoh for getting involved in an alleged scam over plots of land that belong to his client, one Alhaji Saka Kareem Oladele to the tune over N7million (Seven Million Naira).

Oladele in his petition to the EFCC alleged that he gave a power of attorney to Jimoh to sell his 35 plots of land, out of which he sold 20 plots to one Mr Michael Jolaiya.

Oladele further alleged that Barrister Jimoh after deducting his commissions on the 20 plots refused to remit the money realised from the sales to him. Jimoh he also alleged, having prepared a sale of land agreement for the 20 plots, still went ahead and fraudulently resold the plots of land to an unsuspecting buyer who have been erecting illegal structures on them, including the 15 plots that are yet to be sold.

“Despite all persuasions and attempts to settle this matter amicably with Mr Akeem Jimoh, he had turned deaf ear to wise counsel and believe that he is above the law. He has also boasted to deal with me”, Oladele stated.

The suspect during interrogation in the Commission, admitted that the petitioner gave him power of attorney to sell the plots of land.

According to him, “The land was handed over to me by Alhaji Saka Oladele via power of attorney dated 2004 to sell his 35 plots of land, situated at Tanker Area, Ilorin, Kwara State, but there was no specific amount mentioned in the power of attorney as at that time.”

The suspect will soon be arraigned in court.