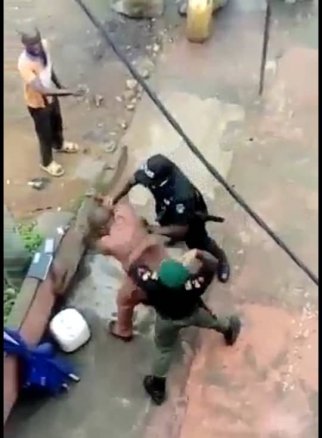 A lawyer, Jerry Obasi, who was assaulted by police officers is now in the hospital, an official has said.

The Nigerian Bar Association (NBA) has also condemned the assault which the police leadership has vowed to investigate.

The video of the assault, which was posted on social media, has since gone viral.

In the video, armed police officers could be seen beating the lawyer who tried to talk to them.

It was the intervention of other police officers that saved the lawyer from the beatings.

In a statement by the spokesman of NBA, Kunle Edun, the association described the attack as unprovoked, undignified and degrading.

“The Nigerian Bar Association, has been informed by the Chairman of the Onitsha branch of the NBA, Mr. Ozoemena Erinne, of the unprovoked, undignified, degrading, shameful, disgusting and unprofessional conduct of officers of the Nigerian Police Force over the grievous assault inflicted on its member *Ogbonnanya Jacob Obasi Esq.,* in the afternoon of Friday, October 11th, 2019,” Mr Edun said.

He said the NBA was informed that the only offence committed by Mr Obasi was that he attempted to intervene when he sighted a citizen being pummeled by some police officers in uniform, at Osuma Bus stop, Awka Road, few metres from his law firm.

“The intervention to stop the beating up and brutalization of a fellow Nigerian, obviously irked the overzealous police officers, who mercilessly pounced on him, and viciously attacked him (including hitting him with the Butt of their gun), as shown in the video footage”, the spokesman wrote.

“The Premier Bar has vowed to urgently take up this matter, and indeed has taken some immediate steps, to serve as deterrent to other police officers and men, and as well, serve the purpose of formal justice.

“The NBA President, Paul Usoro, SAN has directed that all neccessary and appropriate actions be taken to ensure that our colleague gets justice against the assault inflicted on him by the Nigerian Police,” Mr Edun said.

The police in Anambra State say they have commenced investigation into the incident.

A statement by the spokesman of the police in the state, Haruna Mohammed, said the command will discipline any indicted police officer.

“The Commissioner of Police CP John B.Abang,fdc is deeply worried about this disturbing development allegedly perpetrated by the police attached to this Command”

“The CP equally directed with immediate effect discreet investigation to ascertain the authenticity of the video and if true bring perpetrators of this professional misconduct to book.

“You will be updated with the outcome of investigation in due course please,” Mr Haruna said.

NBA 2020 Elections: Beware, We Deal Only with Branches on Correction...