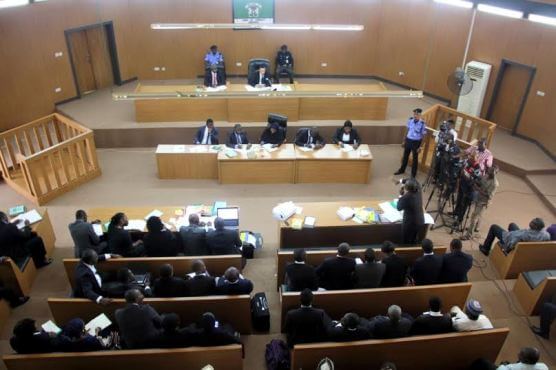 NJC Approves Extension Of Muhammad’s Appointment As Acting CJN
As long as the Code of Conduct Tribunal (CCT) remains tied to the apron strings of the Presidency, it can never act independently, hence there is a high tendency for its decisions to be subject to the whims and caprices of that arm of government.

Consequently, lawyers in the wake of the guilty verdict passed on the suspended Chief Justice of Nigeria, Walter Onnoghen, want the tribunal extricated from the executive’s grip in order to guarantee its independence and enhance its perception as an unbiased umpire.

The tribunal, considered a quasi-criminal court, is established by Section 153 of the 1999 Constitution (as amended) under Federal Executive Bodies.

Yesterday, the National Judicial Council (NJC) affirmed that it considered and approved the extension of the appointment of Justice Tanko I. Muhammad as the Acting Chief Justice of Nigeria for another three months.

According to a statement issued by its Director of Information, Soji Oye, the extension was approved on April 18, at the 88th meeting of the NJC, in line with Buhari’s request. The statement, however, debunked reports from some quarters that the council would meet next week to deliberate on the extension of Muhammad’s appointment as the acting CJN.

Oye informed that the council has since forwarded its approval to the President.

It would be recalled that Muhammad was appointed on January 25, following the suspension of Justice Onnoghen as the CJN by Buhari.

Except the NJC recommended Justice Muhammad to the President for another three months appointment, in accordance with Section 231(5) of the 1999 Constitution, such extension would be unconstitutional.

According to Sub-section (4) of the same section, the President doesn’t need the NJC to appoint an acting CJN whenever vacancy exists, but cannot extend such appointment except in compliance with Sub-section 5, which says that the NJC would have to recommend the person for extension of appointment.

Also, “Except on the recommendation of the National Judicial Council, an appointment pursuant to the provisions of Sub-section (4) of this section shall cease to have effect after the expiration of three months from the date of such appointment, and the President shall not re-appointment a person whose appointment has lapsed.”

Speaking on the need for the CCT to be independent, especially in the trial of Justice Onnoghen, the Executive director, Access to Justice, Mr. Joseph Otteh said the cardinal rule of law requirement is that courts and tribunals, which exercise judicial powers should be independent of the other arms of government and appear in the perception of reasonable observers, to be so independent.

“Unfortunately, the CCT did not offer this guarantee of independence, neither its perception; far from it. The tribunal had, from the word go, drawn the handwriting on the wall indicating that it was bent on a particular outcome, and that it would look neither to the left, nor to the right in the blind pursuit of that goal.

“At several pivotal junctures in the course of the trial, the tribunal appeared to demonstrate that it was clearly on the same side with the government, and was not sitting as an unbiased umpire or judicial arbiter,” he said.

According to him, undue interference in the work of the tribunal was more evident when Danladi Umar and other members of the tribunal granted, an ex-parte order removing Justice Onnoghen as CJN on January 23, 2019. The bizarre and egregious procedure taken to unseat Justice Onnoghen, he said, was an unmistakable indication that no barrel was too deep to plumb in getting to achieve what the tribunal wanted to achieve, and no rule or principle of law was strong or revered enough to forestall its plan.

“It will not surprise many that the CCT reached the verdict it did after using very questionable procedures from the very start. A tribunal under the Presidency cannot be independent of the Presidency, which is a political institution,” he declared.

For the former chairman of the Nigerian Bar Association (NBA), Lagos Branch, Mr. Alex Muoka, “Judicial functions should be under the judiciary. The Code of Conduct Bureau (CCB) plays an executive function,” he stated.

Lagos lawyer, Yinka Oyeniji stressed that all judicial organs are expected to be under the judicature.

“There have been arguments over the generic nature of the CCT. Once its status as a judicial body is a creation of statute under the Constitution, its very nature as a judicial organ cannot by any stretch of imagination be a tool in the hands of the executive.

“To that end, I refuse to think it is quasi-judicial. It is not an investigative body like the police force or under law enforcement agencies of the executive,” he said.

According to him, all judicial organs should and must be under the judiciary, which interprets laws, but does not enforce them.

He said: “Perhaps, it should undergo a re-christening from being a tribunal to something, which represents democracy and the tenets of separation of powers, rule of law upon, which true democracy stands.”

A law lecturer at the University of Nigeria, Nsukka, Uju Peace Okeke, expressed doubt about the capacity of the CCT to be fair and independent under the current enabling law.

She explained that Item 12 (Part 1) of the 5th schedule of 1999 Constitution provides that “any allegation that a public officer has committed a breach, or has not complied with the provisions of the code shall be made to the CCB, and by Item 12 (Part II), chairman, members and staff of CCB/CCT are included public officers for the purpose of Code of Conduct.

ALSO READ   From the Archives: Nigeria Should Stop Treating Attempted Suicide as Crime

“If an allegation against members of CCB/CCT are made to the CCB, the same body investigating, how can it be fair in the investigation? The worst part of it is that only the CCB can refer matters to the CCT. So, if the CCB refuses to refer a genuine case to the CCT, nothing happens. This gives room for corruption as absolute power corrupts absolutely,” she said, adding that there is the need to bring the CCT under the National Judicial Council (NJC) since by item 15(3) of the Third Schedule of the constitution, the chairman and members of the CCT are appointed by the President on the recommendation of the NJC.

“If NJC is the recommending body, then it should be the sanctioning body. Item 16(2) providing that the power to appoint and discipline the staff of CCT vests in the members of the CCT does not seem proper in a democracy.

“Furthermore, considering the powers conferred on the CCT, it is best that it is brought under the judiciary proper with Nigerians (apart from CCB) having the right and opportunity to institute actions bothering on code of conduct. That way, it will truly serve its purpose,” she declared.

The former International Prosecutor, United Nations International Criminal Tribunal for Rwanda, Mr. Segun Jegede, in his submission held that the philosophy behind the creation of the tribunal is to make it an independent entity with jurisdiction over judicial officers straddling the three organs of government.

“If this is so, it would appear that the CCT is meant to act as an administrative tribunal devoid of executive or judicial control. In practice however, while it is clear that the CCT is not a judicial body given the provision of Section 6(5) of the Constitution, which vests judicial powers on certain enumerated courts, excluding the CCT, it is less so difficult to assert that the CCT is not under the control of the executive,” he said, adding that it is difficult to imagine how the tribunal can dispassionately discharge its constitutional functions under the judicial arm as well.

His words: “This so because there is no institution, secular or religious, that is untouched by the unmatched vice of putrefying corruption that has permeated all facets of life in our country. Left to me, I would recommend a court that is structurally independent of all arms of government, in all respects, with the virtue of integrity as its watchword.”

Partner, Perchstone and Graeys, Lagos, Mr. Folabi Kuti believes that it is not so much of the structure of the CCT, but the independence from interference of the executive and/or the judiciary itself.

“The structure of the tribunal is well thought-out. It is the perceptive interference/intrusion in its work that erodes confidence that it can operate independently,” he said.

While Abuja-based lawyer, Dr. Agada Elachi says, “I still believe they perform a judicial function and should remain under the judiciary,” Stephen Azubuike, a Lagos-based legal practitioner thinks differently.

According to him, it is not precisely correct to say that the CCT is under the executive arm of government.

His words: “The courts have clearly explained that there is a difference between the Federal Government of Nigeria and the Federal Republic of Nigeria (i.e. the Federation).

Azubuike argued that the appointment of the chairman and members of the tribunal is made by the President in accordance with the recommendation of the NJC, similar to how judges and other top members of the judiciary serving at federal level are appointed.

He, therefore said that the temptation to presume that the CCT is under the executive came from the heading before Section 153 which says, “Establishment of Certain Federal Executive Bodies, arguing that, in law, headings of statutes play no significant role to their interpretation because the provisions in the body of a statute hold sway.

Said he: “The tribunal is not, constitutionally speaking, under the executive. It is a special body created by the Constitution for the federation just like the NJC also created under Section 153. It is safer to even conclude, if we must, that the Code of Conduct Tribunal is under the judiciary.

“The root of executive interferences flows from the level of political influences generally. For instance, in Nigeria today, politicians play a huge role in determining who will ultimately be recommended by the NJC to the President to serve in judicial or quasi-judicial capacities. Same thing applies at the state level. This makes executive interferences quite difficult to curb.

“Securing the independence of the CCT and the judiciary must start from a consideration of the calibre of individuals recommended for ultimate appointments. These persons must be individuals ready to live above board and to defend the Constitution at all cost.”

Flags to Fly at Half Mast in Rivers State to Mourn...