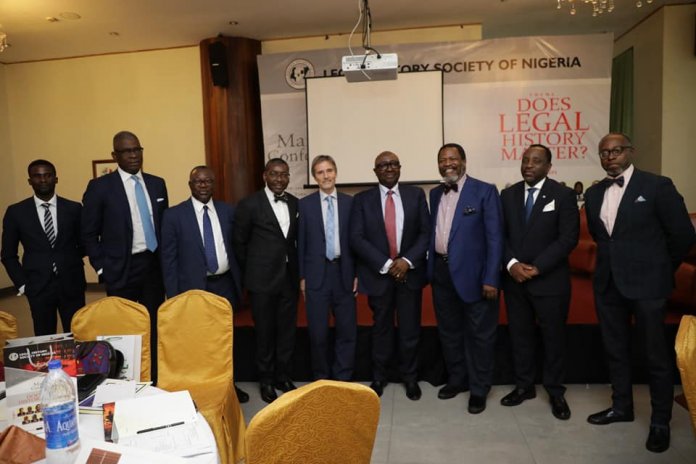 Eminent scholars have advocated the institution of legal history in Nigeria.

The scholars, which includes senior members of the Nigerian Bar and others including those from abroad said preserving the legal history of the country in such a manner that it could be easily retrieved when needed, would assist future generations in terms of understanding the reasoning behind every piece of legislation.

They spoke at the maiden conference of the Legal History Society of Nigeria in Lagos with the theme: “Does Legal History Matter?” The event also marked the official launch of the Society.

Underscoring the importance of legal history, Idigbe, who is the president/chairman of the Society explained that if legal history is not preserved, we may be doing things the wrong way in the future or do them differently.

“So, it is not just the issue of preserving legal history, it is about the ability to recall or retrieve it and use it. You should not work for what has been worked for in the past. We should be building on what has been worked for instead. In a situation where there is a gap between what we do today and what was done in the past, it will result in doing the things all over again and that will limit our experience. The more experienced you are, the easier it is to do things,” he stated.

He said that the same applies to a country because if she doesn’t preserve her history, then she would be working as if she is just starting and obviously make the same mistake every new person makes.

According to him, the society is trying very hard to identify where the history can be found, retrieve it, and store it in a manner that it can be recalled, be it in the manner of electronic format, books and oral history.

He explained that getting oral history will involve speaking to people who have been involved with history as it relates to law, transcribing them and storing them in a manner that it can be recalled.

Ajogwu, who chaired a panel on legal history and politics said it is important to keep the country’s legal historical journey. “If you don’t know the reason why certain laws are passed or what led to some reforms, the next time you are about to do it, you might not know how to proceed.

“If you listen to the debate on how certain laws are made, they aid in adjudication and deciding what was the mischief it sought to cure. We felt that it is important not just to be quoting English laws, we need to document our own legal history,” he stressed.

According to him, the case of Ahmed Tijani and Adesugba, a 1920s matter dealt with ownership and integrity of the judiciary at that time and specifically the politics of that time because we were a protectorate.

Ajogwu pointed out that in reading the decision, one could see the reasoning on issues pertaining to the ownership of land in Lagos and to the entire colony of Lagos.

His words: “If you drive around Ikoyi, you will see Bourdilion and McPherson. Those are our history. We cannot just assume that future generations will know. They deserve to really know what our legal history was. That is what Legal History Society is doing – showing the nexus between laws and society, laws and religion as well as laws and politics. It touches every other thing because a lawless society is not a society.”

He added that in the absence of legal history, there is a duplication or contradiction of existing laws, which creates disorder.

Speaking as a panelist on legal history and the role of newspapers, publisher of Thisday Newspapers, Mr. Obaignena noted that the only way to attract investment for a company is to run it well.

He said: “If you run a good company, you can attract investment from anywhere. We have to determine our future in 2023. It is how we build that future that will determine our development. And in doing that, we need a strong legal institutions and services as well as a robust media.

Akinnola decried what he called lack of research and in depth investigation among journalists and expressed optimism that the society would help to deepen learning in that area.

While Girard delivered the keynote address, Ojo, who chaired the event gave the opening speech.