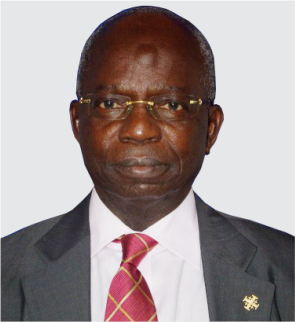 Prof. G. A. Olawoyin, SAN was born on Monday, July 31, 1939 in Ile-Ife into an upper middle class family. Following his primary education in the Royal School, at 135 Iremo Road, Ile-Ife; (His maternal grandfather’s private school) African School, Ilesa; African School, Oke-Eso, Ile-Ife and Central School, Ilare, Ile-Ife, Professor Olawoyin proceeded to Oduduwa College and later Ogbomoso Grammar School where he emerged as the best student at the final examination. He worked briefly with the Federal Civil Service in Lagos and Nigerian Breweries Limited as an Accounts Clerk. He started his Higher Secondary School Certificate Programme at Abeokuta Grammar School, Abeokuta in January 1959.

The young Olawoyin sat for his General Certificate of Education (GCE) Advanced Level in January 1962. He passed the examination in flying colours and this enabled him to gain admission into the prestigious London School of Economics and Political Science (University of London). He received his Bachelor‟s and Master‟s degrees in Law from University of London in 1965 and 1966 respectively.

Immediately after acquiring the Master‟s degree from the London School of Economics in October 1966, Mr. Olawoyin returned to Nigeria and was appointed an Assistant Lecturer in Law at the University of Ife (now Obafemi Awolowo University). Two years later, he left for the University of Bristol, UK, for a doctorate programme in law. After receiving the Ph.D degree in law, he returned to the University of Ife in October 1970 as a Lecturer Grade II. Four years later, Dr. Olawoyin was appointed a Senior Lecturer in Law. He attended the Nigerian Law School, from October 1974 and was called to the Nigerian Bar in June 1975, winning three of the four prizes awarded by the Nigeria Law School for that year.

In May 1978, Dr. Olawoyin was appointed a Professor of Business Law at the University of Ife. This development was a milestone not only in the academic career of Professor Olawoyin, but in the history of the legal profession in Nigeria as well. This is because, he was the first Nigerian to be appointed a professor of business law in Nigeria. Not long after this, he was also appointed by the Nigerian Institute of Advanced Legal Studies as a Visiting Professor of Business law.

Three years later, in 1981, he retired from full-time university teaching. At the time, he was only three and a half years old as a Professor. Prof. Olawoyin later served as a part-time lecturer at the Nigerian Law School between 1981 and 1982 and at Lagos State University, Ojo, between 1986 and 1988. Though business law remained his primary field of specialization, he also commanded widely acknowledged mastery of related aspects of law.

This commitment to professional excellence and service to humanity found expression in many public appointments he received. Noteworthy among these was his chairmanship of the Nigerian branch of the International Chamber of Commerce, membership of the International Court of Arbitration as well as membership of the Lagos Chamber of Commerce and Industries. In addition to these, he is a director, Wema Securities Nigeria Limited; a fellow of the Institute of Directors; a director, Multi-Royal Investments Limited; member, International Bar Association. He is also the Chancellor of the Anglican Diocese of Ife. Prof. Olawoyin served as the Chairman of the Ife/Ijesha Zonal Health Board and a member of the State Health Council in old Oyo State.

He was Pro Chancellor and Chairman of Council of UNIOSUN. In 2005 Professor Olawoyin SAN a devout Christian, was made the Chancellor of the Anglican Diocese of Ile-Ife.

He is happily married to Mrs. Agnes Arike Olawoyin (Nee Oladini) and they are blessed with children and grandchildren all of whom have given them tremendous joy among whom is Dr. Adewale Adedamola Olawoyin, SAN,