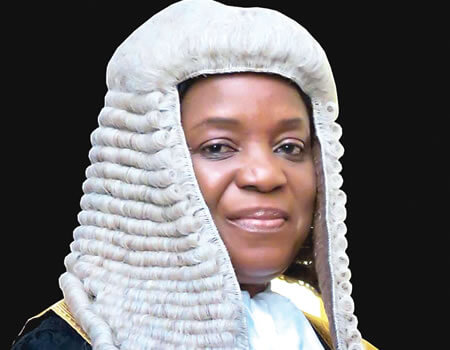 Professor Oluyemisi Adefunke Bamgbose SAN, is a Professor of Criminal Law and Criminology and the First and presently the only Female Professor of Law in Nigeria to be conferred with the rank of Senior Advocate of Nigeria.

Prof. Bamgbose was born in Ibadan on June 26, 1961 to Chief A.A.K. Degun, CON and  Otunba (Mrs) C.M. Degun of Ijebu Ode. She started her primary education at University of Ife Staff School, Ibadan branch, now The Polytechnic Ibadan Staff School. From there, she proceeded to Queens School,  Apata, Ibadan.  She obtained her A Levels at Adeola Odutola College, Ijebu-Ode and was subsequently admitted into the University of Lagos to study law. After obtaining her LLB, she proceeded to the Nigeria Law School, Lagos for her BL and was called to the Nigerian Bar in 1984. She obtained her Master of Laws Degree from the University of Lagos in 1990 and became a Professor of Law in 2003. In September 2018, she was elevated to the rank of Senior Advocate of Nigeria.

Prof. Bamgbose SAN started her early career with the Oyo State Ministry of Justice during her one year compulsory National Youth Service Corps (NYSC) programme. She then proceeded to Ogun State Ministry of Justice where she became a state counsel and rose to the position of senior state counsel and DPP. In 1987, she was employed by the Faculty of Law, University of Ibadan, as an assistant lecturer and rose through the ranks to become a Professor of Law in the School.

A teacher of teachers, she has assessed many professorial and doctoral candidates in many Universities in the country and has produced many doctoral students. At the undergraduate and postgraduate levels, Professor Bamgbose has supervised over two hundred and fifty students. She has acted as an external examiner to many institutions in Nigeria including University of Lagos, Lagos State University, Olabisi Onabanjo University, Ago Iwoye and University of Nigeria, Nsukka. She was visiting professor at Ogun State University Ago Iwoye (now Olabisi Onabanjo University) in 2000, at Marquette University School of Law, Wisconsin, United States of America in the Fall Semester 2001, at Saint Louis University School of Law, Saint Louis, Missouri, United States of America in 2008 and at the University of Lagos. Akoka, Lagos from 2014 -2015.

Professor Bamgbose is a Fellow of Salzburg Seminar Austria and a Fellow of the Chartered Institute of Arbitrators. She served as Chairperson of “The Study Group on the Death Penalty for the Government of the Federal Republic of Nigeria.” She was a Member of Nigeria’s National Committee on the Reform of Discriminatory Laws against Women and was also the Chairperson of the Constitutional Review Committee for Oyo State Nigeria. She was a Member of the Technical Working Committee of the NHRC/ Ford Foundation Project “Fair Trial and the Right to Effective Participation in Governance: Independent Review of Evidence of Gross Violations of the Rights to Participate in Government and Fair Trial through the Election Petition Process in Nigeria”. She has recently been appointed by the NBA as Chairman of its newly established NBA Women Forum.

She has published many articles, books and technical reports in English language and translation into other languages in both national and international outlets. She is the author of the book “Law and Practice on Disaster Issues” and Co-author of the book “Criminal Law in Nigeria”.  She is a widely travelled scholar who belongs to many national and international bodies. She has a strong interest in women and children issues and has spoken at many conferences on issues relating to women and children. She was the Guest speaker at the Celebration of 100 years of Women in Law at Saint Louis University, Saint Louis, Missouri, USA in 2008, the 3rd Professor Jadesola Akande Memorial Lecture organized by the Nigerian Institute of Advanced Legal Studies, Lagos in 2014 and at the 2nd Grace Foundation Lecture in 2014.

Professor Oluyemisi Bamgbose SAN, is happily married to a jurist and author of The Digest of the Judgments of the Supreme Court of Nigeria, Honourable Justice Olatokunbo John Bamgbose and they are blessed with three children who are all legal practitioners.