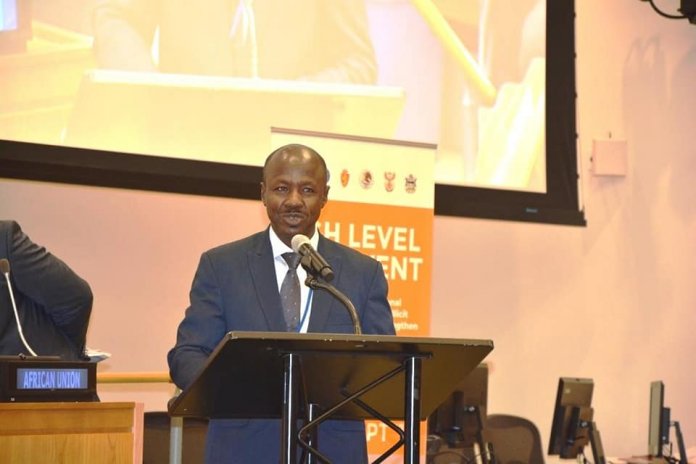 The federal government has called for a probe of Justice Christopher Butcher of the London Commercial Court hearing the dispute between Nigeria and an Irish-owned firm registered in British Virgin Island, Process and Industrial Developments (P&ID), over a failed gas project that went into arbitration with $9.6 billion claim against the country.

Acting Chairman of the Economic and Financial Crimes Commission (EFCC), Mr. Ibrahim Magu, who is part of the Nigerian delegation to the court session yesterday, told ARISE NEWS, a sister broadcast arm of THISDAY Newspapers, in an interview in London that the court was so desperate to enforce the arbitral award.

Two other members of the delegation, Minister of Information and Culture, Alhaji Lai Mohammed and Central Bank of Nigeria (CBN) Governor, Mr. Godwin Emefiele, who also spoke with ARISE NEWS, reiterated the federal government’s allegation that the Gas Supply and Processing Agreement (GSPA) between P&ID and the Ministry of Petroleum Resource was aimed at defrauding Nigeria.

Magu, who expressed loss of confidence in the British commercial court, said Nigeria would take the matter up at the diplomatic level.

He said: “The entire transaction is predicated on fraud; complete fraud and irregularities by people trying to exploit the weakness in the system to their advantage. I am also worried that the commercial court that gave the judgment here on the award is so desperate on the enforcement of the judgment itself. That shows clearly that we do not have confidence in the commercial court because they seem to have interest in making sure they enforce it; otherwise they should give us a chance for us to come in with our complaint.

“P&ID does not even exist in Nigeria. It is a shell company and as far as I am concerned, the directors we have committed so far are the witnesses to the agreement and also to the MoU. The main actors who actually signed the MoU and the agreement incidentally are all dead, that is (Michael) Quinn and Lukman (former Nigerian Minister of Petroleum Resources). There is something sneakier to the whole deal.

“We would have to approach at government or diplomatic level. We will also appeal to the appropriate authorities to also investigate the conduct of the judges that actually passed the award because this is the worst in the world. There has never been an arbitration award at this level that is so high; nowhere in the world. It has not happened. $9.6 billion? Do you know how it can aggravate the refugee situation in Nigeria? Do you know how it would affect our GDP? Do you know it would affect the economy?
“That is almost about one-third of our budgetary allocation. We’re over 200 million Nigerians. We will not take it.”

On the lessons Nigeria has learnt from the P&ID case, Magu said: “That’s why we are here to deal with the situation on ground. After dealing with the situation on ground, we would address other things. There are some other agreements – about six like that that we need to look into that were against Nigeria, from same judges. The same judges have given another judgment of income against Nigeria. And the same expert opinion was being run. You can see the conspiracy.”

On his part, Mohammed said GSPA, under which Nigeria was to supply wet gas to a plant P&ID was to build in Cross River State for the generation of electricity, was enmeshed in corruption and irregularities, adding that all those involved in it were being investigated.

“Already, we have been able to establish fraudulent practices, including money transfer between P&ID and some key officials of the Federal Ministry of Petroleum Resources,” he stated.

Asked if Nigeria is opened to an out-of-court settlement, he said the federal government had not foreclosed any option in resolving the issue.

“Nigeria is doing everything to ensure that all our assets are safe from any embarrassment. I think P&ID is actually panicking because we are actually getting to unravel the sham called P&ID. Don’t forget that even before now, the company had been involved in other sham arbitration awards, some of which had been set aside. I think this is the only government that has the courage to call off the bluff of P&ID and we are not going to stop until we unravel this sham called P&ID,” the minister added.
Also speaking, Emefiele said it was unfortunate, that such an incident happened.

“I think the lesson is that for us, it is an eye-opener and I am very happy at the way the government and the president are taking this.
“This really concerns all of us and that is why this time all hands are on the deck to ensure that we destroy the foundation of this fraudulent transaction, to ensure that in the future, it doesn’t happen again.

“That was why the attorney general is here; the Minister of Information and Culture is here; the Inspector General of Police is here, the Chairman of the EFCC is here, and I also here.

“We consulted and met different key persons as to the best option to adopt, not just the arbitral award, but in terms of other strategies to deal with this matter,” he added.

Onnoghen: No Allegations of $3m, 55 Houses Before Tribunal – Prosecutor