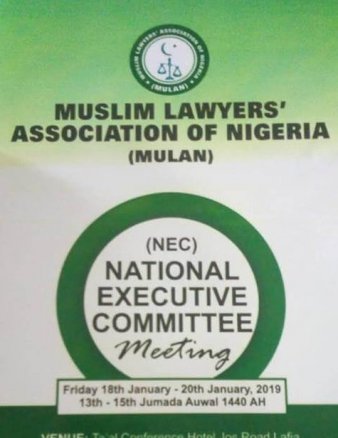 The Muslim Lawyers Association of Nigeria (“MULAN”) has warned that act or conduct whether from within or outside the Bar  and Bench which desecrate the legal profession and the institution of justice in Nigeria should be completely weaned out of the judiciary.

The ceremony which was well attended by representatives of all states branches of the association in Nigeria was chaired by Dr. Hassan Liman PhD, SAN. Among dignitaries that attended the occasion were the Governor of Nasarawa state represented by the state’s Attorney-General. Former attorney generals of the state, Senior advocates and Professors of law, Judges and Kadis, Bencher and Senior members of the legal profession. The President of Nigerian Bar Association, Mr Paul Usoro SAN was represented by one of the national officers of the Nigerian Bar Association.

In the course of the meeting, the association used the opportunity to consider and discuss issues of national importance; particularly, issues bordering on security, legal profession, and incoming election in the country.

The  following communiqué was issued at the end of the NEC meeting: