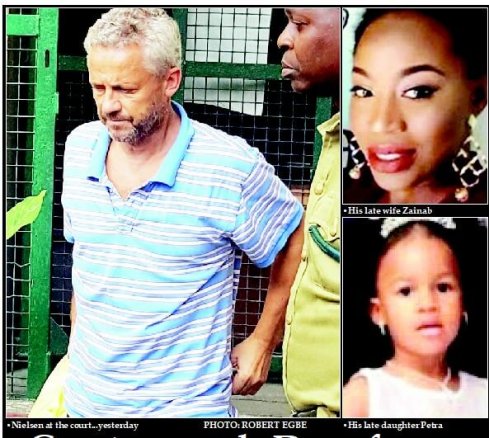 A Lagos High Court in Igbosere on Tuesday heard that some of the biological material found on the night wears of a murdered Nigerian woman and her child, matched that of a Dane, Peter Nielsen.

He said Nielsen’s DNA profiles also matched some of the male DNA samples found on the pyjamas worn by his three-and-half-year daughter, Petra.

Somiari, Centre Director for the Lagos State DNA & Forensic Centre (LSD&FC), testified as the final prosecution witness in Nielsen’s trial for the April 5, 2018 death of Zainab and Petra.

The Lagos State Government accused the 54-year-old Dane of smothering Zainab and Petra to death at about 3:45 am at No. 4, Flat 17, Bella Vista Towers, Banana Island Ikoyi, Lagos.

Five people were said to be in the apartment on the night of the incident: Nielsen, Zainab, Petra and two of Zainab’s step-sisters; Gift and Favour Madaki.

Nielsen was arraigned last June 13, on a two-count murder charge, in accordance with Section 223 of the Criminal Law of Lagos State, 2015.

He pleaded not guilty, following which the judge ordered his remand for trial.

At the commencement of proceedings Tuesday, Somiari, who was led in evidence by Director of Public Prosecution (DPP), Titilayo Shitta-Bey, explained the LSD&FC’s involvement in the case.

He said: “The Lagos State DNA & Forensic Centre was contacted on April 9, 2018 by the Nigerian Police to help process a crime scene. We responded on April 10 and visited the crime scene at Bella Vista Towers, Banana Island, Plot 4, Flat 17.”

Somiari said he and three members of his team, a police team, an anatomy and forensic pathologist from the University of Lagos Prof John Obafunwa, a representative of the Danish Embassy in Nigeria and a legal representative were at Bella Vista Towers.

The witness, who also holds a degree in Crime Scene Processing from a United States university, testified that after riding the elevator to Flat 17, they found “No sign of forced entry. The safe in the house, there was no evidence that it was tampered with.”

Somiari said his team observed stains, “which were eventually confirmed to be blood”, in the kitchen. Certain areas, he noted, appeared to have been cleaned.

“There was evidence of selective cleaning,” he added.

The team returned at night to deploy equipment which operated in the dark. They collected evidence and took it to the LSD&FC for analysis, the court heard.

Prodded by Shitta-Bey, the witness explained why he suspected that blood had been wiped off.

He said: “If there is no visible sign of blood and after you spray Luminol, blood is revealed, it suggests that there was an attempt to clean off the blood.”

Luminol, The Nation learnt, is used by forensic investigators to detect trace amounts of blood at crime scenes, as it reacts with the iron in hemoglobin.

Somiari noted that their investigation of the crime scene suggested that both corpses were moved, “and some contact evidence should be on the body. You would expect Zainab’s gown to reveal some information.

Nielsen’s counsel, Olasupo Shasore SAN, contested Somiari’s view that the location of the samples indicated that there had been “a struggle.”

But the judge overruled the objection of the former Lagos Attorney-General and Commissioner for Justice.
Earlier, Somiari said he had contacted the police and requested for Nielsen’s samples that they had “so that we could compare.”

He added: “We were able to match the defendant’s DNA profiles with the male DNA from the locations we found male DNA profiles on Zainab’s nightgown.”

The witness said the outcome was similar with respect to Petra’s pyjamas.

He said his team also considered the likelihood that the profile found on the crime scene were unrelated.
Somiari said: “The likelihood of someone else, not Mr Nielsen, to have contributed to the DNA profile, – Item 11A in our report, i.e. nail scrapings from Zainab – is one in seven billion.”

He noted that for nother spot on Zainab’s gown, which DNA also matched Nielsen’s, “the statistics, in this case, was astronomical. The likelihood to find another person with that same profile was one in seven quadrillion.”

Following the conclusion of his testimony, Justice Okikiolu-Ighile adjourned till July 3 for cross-examination.

Defection of Governor/Deputy from One Political Party to Another – Judgment...