Home Opinions Nature & Scope of the Written Memorandum of Claim & Options for... 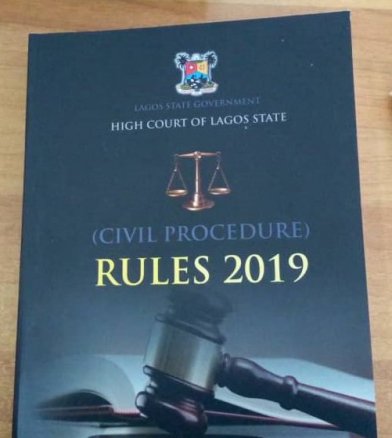 Order 5 Rule 1 (2) of the High Court of Lagos State (Civil Procedure) Rules, 2019, which came into effect on 31 January 2019, provides that “all civil proceedings commenced by Writ of Summons shall be accompanied by a list and copies of the following documents:

(a) a Statement of Claim;

(b) a List of Witnesses to be called at the trial;

(c) written statements on oath of the witnesses except witnesses on subpoena;

(d) copies of every document to be relied on at the trial;

Order 5 Rule 1(3) of the same Rules then states that “failure to comply with Sub-Rule (2) [of Order 5 Rule 1] shall nullify the action.” Similarly, Order 5 Rule 5 (3)(d)) provides that an Originating Summons shall be accompanied by:

(a) an Affidavit setting out the facts relied upon;

(b) all exhibits to be relied upon;

(c) a written address in support of the Application; (d) Pre-Action Protocol Form 01 with necessary documents.”

Looking at, and reading together, provisions of the Rules in relation to requirements of the Pre-Action Protocol Form 01, it is obvious that the Form is in the nature of a Statutory Declaration on Oath (an affidavit) since it is required as a matter of law to be deposed to before a Commissioner for Oaths.

A mandatory paragraph/content (deposition) in the Pre-Action Protocol Form 01, annexed to the Rules and titled, “Statement of Compliance with Pre-Action Protocol” (pursuant to Order 5 Rule 1(2)(e) & Order 5 Rule 5 (3)(d)) goes this: “I/We have made attempts to have this mater settled out of Court with the Defendant and such attempts were unsuccessful,” and that “I/We have by a Written Memorandum to the Defendant set out my/our claim and options for settlement.”

The Form then states that the deponent to such depositions (Statutory Declaration) must go ahead and specify precisely what attempts he or they (claimant or claimants) has/have made to have the matter settled and he/they must attach evidence of such efforts. Further, the Form provides, if no such peace efforts have already been made by the claimant(s), as at the time of filing the action, the deponent to Form 01 must state reasons why the claimant(s) didn’t pursue such peace efforts before resorting to litigation, and must still, now on the Form 01, “set out his options for settlement hereunder.” Meaning that where no efforts have earlier been made (prior to commencement of the action) by the Claimant to settle peacefully with the defendant out of court, the claimant has a duty to do two things in Form 01, namely:

(1). Give reasons why the claimant had not pursued such options of peaceful settlement before litigation; and

(2). Set out in Form 01 any options the claimant now has (propose) for peaceful settlement of the case (i.e., ADR).  This information and propositions would be helpful during the mandatory Case Management Conference & Scheduling (CMCS) proceedings provided for in Order 27 of the same Rules. In Order 27 Rule 1(2)(c), “promoting of amicable settlement of the case or adoption or ADR” is one the major objects/purposes for instituting the mandatory CMCS Proceedings under the Lagos 2019 Rules. Besides, one of the orders the CMCS Judge may make during CMCS proceedings is to refer the entire case to ADR, in line with Order 27 Rule 2(l) and & (m) dealing with “making referrals to the Lagos Multi-Door Court-House or other relevant ADR Bodies” or “implementing any ADR order” made under Order 27 Rule 2(l) of the Rules. Provisions and procedures for settlement of cases by ADR are set out in Order 28 of the same Rules.

Three things are therefore obvious from the provisions of Order 5 Rule 1(2)(e) & Order 5 Rule 5 (3)(d) of the High Court of Lagos State (Civil Procedure) Rules, 2019, and from the contents and the very nature of the said Form 01:

The effect of this, it is respectfully submitted, is, as it appears, that failure to serve such Memorandum (which is in the nature of a Pre-Action Notice) or failure to give cogent reasons why such was not served (where it was not served before the commencement of the action), is fatal to any action instituted by means of Writ of Summons or Originating Summons. Further, where such Memorandum has been served but a copy of it is not annexed to Form 01, as required by Form 01, this may be fatal to the suit/action. The next question begging for an answer is as to what is the exact nature and contents of such “Written Memorandum of Claim & Options for Settlement?”

The 2019 Lagos High Court Rules does not provide any express format to serve as a guide, but a community reading of the above-quoted Rules and a careful look at the relevant contents of Form 01 would suggest that a Written Memorandum of Claim & Options for Settlement as contemplated by the Rules and Form 01, is merely a simple letter setting out the following particulars of information:

In summary, a Memorandum of Claim & Options for Settlement is a Pre-Action Notice. It is respectfully suggested that any unambiguous letter written by or at the instance and on behalf of the proposed claimant, and containing particulars of information as would be reasonably construed as amounting to sufficient compliance with the six items enumerated above, would be taken to have satisfied all requirements as to the nature and content of such “Written Memorandum.”

I would now end this short commentary by referring us to these wise counsel from the masters, on why every lawyer worth his onions should endeavor to not only inform, but to honestly and candidly persuade his client to sincerely explore and vigorously pursue options of ADR before resorting to litigation. It pays a lot as it saves s lot.

Umahi’s Misadventures, Matawalle’s Escape and the Law Being a Prancing Ass