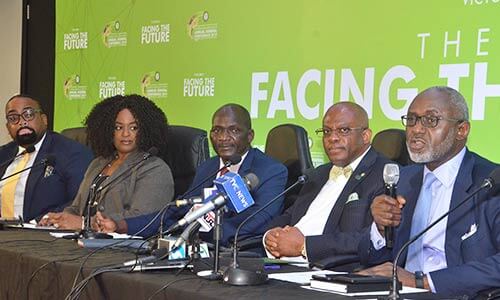 The week-long gathering, which is arguably the largest and most heavily-attended conference event on the African continent will be held at the cavernous Convention Hall of the prestigious Eko Hotel & Suites in Lagos, the commercial hub and cultural melting-pot of Nigeria and indeed the West African sub-region, from Friday, August 23 to Thursday, August 29, 2019 – under the theme, ‘Facing the Future.’

Details of the programme and content of the 2019 conference, which is the 59thin the long and illustrious history of the NBA’s annual conferences, were given on Wednesday, 17 July, 2019 by the 2019 Technical Committee on Conference Planning (TCCP), at a media briefing in the Lagos offices of the law firm of Aluko & Oyebode.

In his remarks of welcome, NBA President Paul Usoro, SAN, disclosed that the business end of the conference (i. e. the discussion sessions) would commence on Monday, August 26, 2019(after a period which would begin on the 23rd with Moslem and Christian religious services, a number of charitable activities such as a walk, courtesy visits to important personalities such as traditional rulers, etc.)  and end with the President’s Dinner and Closing Party on August 29. Usoro summarized some of the session highlights to include sessions on topical issues – as well as current and emerging trends – in key areas such as the rule of law and what is being currently perceived as assaults upon it. In particular, he said, the conference would examine the workings of the Code of Conduct Tribunal (CCT) from the viewpoint of the perceived clash of executive and judicial powers it seems to embody, and how to position the body to deliver properly on its statutory mandate. Also, the education, training and development of young lawyers would come under focus as the Conference ponders the future of the legal profession in Nigeria – in light of the growing need to regulate the profession and its practitioners. The NBA boss also disclosed that there would be special sessions dedicated to the media (traditional and social alike), as these sessions would explore the growing opportunities currently opening up in the media, as well as the arts, sports and entertainment, and also  the imperative of enhancing professionalism and ethics in the use of social media. The 2019 confab, Usoro ended by saying, would also take a hard look at the issue of mental health and wellness among members of the legal profession, as well as the larger issue of the impact of mental health on the quality of political governance in the country.

The fact that the online registration portal for the 59th NBA AGC has recorded over 10,000 lawyers so far is a source of great encouragement to the members of the conference organizing committee. Its chairman, Gbenga Oyebode, MFR, who spoke next, also revealed that at least 12,000 attendees are expected from all the bar branches pan-Nigeria. Among the dignitaries expected to grace the opening ceremony is the President of the International Bar Association (IBA), Horacio Bernardes Neto, the first Brazilian to hold that position since the IBA was established in 1947 as the world’s leading organization of legal practitioners, bar associations and law societies. He would be joined by Nigeria’s vice-president, Prof. Yemi Osinbajo, GCON, SAN, the acting Chief Justice of Nigeria, Hon. Justice Tanko Mohammed, GCON, as well as Lagos State Governor Babajide Sanwo-Olu, among other leading lights from the worlds of politics, the professions, business and high finance, the academia, diplomacy, the media, etc.

According to Mr. Oyebode, the 2019 NBA Conference will place the three Sections of the NBA (Section on Business Law, SBL; Section on Legal Practice, SLP and the Section on Public Interest and Development Law, SPIDEL) and their respective specialized committee sessions at the core of the conference programme in a bid to aid capacity building; in so doing,lawyers will be enabled to focus on their areas of interest and benefit from increased exposure, especially to emerging practice areas,as they strive to be better equipped to face the future.

That future, the TCCP chair repeatedly emphasized, would be one of tremendous change and disruption. Modern technology in particular, along with the globalization following in its wake, has disrupted every fibre of society. Artificial intelligence, blockchain and financial technology, among others, are just some of the technologies that impact all the sectors, including the legal and justice delivery sub-sectors. The Conference will interrogate lawyers’ response to technology and preparedness to harness these tools for efficient legal services delivery – and the technology-driven judiciary that helps them to do so within a progressive regulatory framework.The concern, therefore, said Mr. Oyebode, was not so much about change itself (which is, of course, inevitable), as about the capacity of lawyers in particular – and Nigerians in general, leaders and led alike –to foresee, navigate and transform our public institutions across the spectrum to manage both present and future circumstances in a way that nourishes sustainable growth in wealth generation, civil rights and freedoms, peace and security. On both a professional and national scale, he said, these changes highlighted the urgent need for a clear and well-considered master-plan for ‘Facing the Future’ – which is what the 2019 Conference seeks to address as it explores issues concerning the rule of law, independence of the judiciary, access to justice (especially for the most vulnerable members of society), and protection of fundamental human rights, as well as the economy and how to maximize the opportunities – and minimize the threats – of the present to guarantee a better future.

To this end, he concluded, the 2019 confab will feature keynote addresses and showcase sessions from world-renowned political and business leaders; training in practice areas for lawyers; networking; and bonding and mentoring opportunities between bar leaders and Millenials, amongst others.

Also speaking, Olumide Akpata, co-chair of the TCCP, also disclosed that the sessions, which number almost 40 in all, would place unprecedented emphasis on technology; the needs and preoccupations of Millenials in the legal profession – and what kind of education they were receiving at present in order to actualize their wide and eclectic range of interests; and gender issues, among them the unfortunate incidences of sexual harassment and abuse of women in the workplace. The fate of Nigeria, a country which, by 2040, would boast a population of about 400 million (thereby overtaking the United States of America as the third most populous nation on earth) and its ability to create an economy that would deliver quality education, healthcare and jobs to this teeming population (the vast majority of which would be young people below the age of 35) would be a key talking-point at the 2019 Conference, Akpata said. He advised anyone seeking further information on the conference programme, content and scheduled speakers to visit both the NBA’s and Conference’s web portals (www.nbaconference.com; www.nigerianbar.org.ng) as well as their social media platforms:

He ended by informing the assembled news-people of the wide range of social activities on offer on the sidelines of the Conference – most of which would be centered on the Conference’s alternate venue, namely, The Harbour Point on Victoria Island. These activities include a stage play; and the aforementioned President’s Dinner.

On her part, Chinyere Okorocha, head of the TCCP’s finance committee, outlined the measures her committee has undertaken to ensure ‘a Conference like no other.’ She assured that whatever logistics challenges (such as insufficient conference materials) had hampered and marred previous NBA Conferences would be a thing of the past, as the TCCP has made contingency plans to respond to any foreseeable emergency. She ended by soliciting the support (in cash and in kind) of all stakeholders – not least from lawyers themselves (as individuals, law firms, trained lawyers in political positions) as well as from corporate bodies and the media.

The NBA helmsmen also fielded questions, comments and observations from reporters during the Q&A session on a variety of issues ranging from the growing insecurity in the land and the need for the NBA to take a more activist stance on pressing national issues; the assault on the rule of law as touched on by the NBA President; the Kebbi State judiciary saga; the El-Zakzaky protests by Shiite adherents in various parts of the country; the state of support for lawyers with disabilities; as well as growing the Nigerian economy and creating jobs; domesticating the gains of the African Continental Free Trade Agreement (AfCFTA) and making sure Nigeria was not shortchanged by the deal; and exploring the benefits to Nigeria and Africa of Brexit (the UK’s planned departure from the European Union).

In their responses, the NBA President, the TCCP Chairman and co-chairman, the SBL chairman and others agreed that the issues around lawyers with disabilities must be tackled beyond the scope of the general conference to ensure a sustainable long-term solution; Mr. Usoro pointed out that the National Judicial Council (NJC) has authority over physical infrastructure in courtrooms, as well as interpreters and user-friendly resources. He called for stronger advocacy in this regard, going forward.

On security, the bar leaders reiterated that lawyers are as much affected as anyone else and therefore had a stake in the enhancement of security in the country. They called on the federal government to wake up to its responsibilities to protect Nigerian lives and property.

Responding to the question of what had been the NBA’s ‘big wins’ since its 2018 annual general conference in Abuja and the inauguration of the present administration, Mr. Seni Adio, SAN emphasized the unity of NBA and its 3 specialized Sections (SBL, SLP and SPIDEL). The success of one Section, he reiterated, is the success of the NBA as a whole. He went on to list the many achievements of the NBA to include the impetus the body provided to ensure Nigeria’s assent to the AfCFTA, the SBL’s work with the office of the Vice-President and the National Assembly on improving Nigeria’s Ease-Of-Doing-Business index, and its mentorship, scholarship and other support programmes for young lawyers.

In his vote of thanks, the general secretary of the NBA, Jonathan Taidi assured all attendees of ‘a Conference like no other’ as the briefing came to a close.

NBA-AGC 2019: My Focus is to Reinvent the Judiciary – CJN