Home NBA News NBA Holds Workshop on the Domestication and Implementation of the ACJA in... 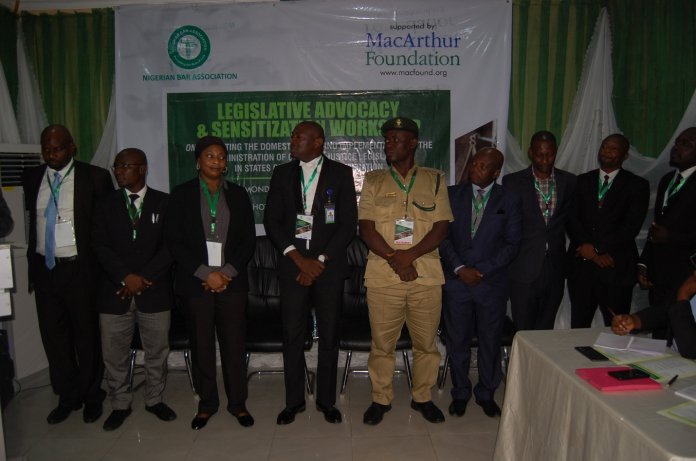 On Monday, 27th May, 2019, the Nigerian Bar Association (NBA) in collaboration with the Mac-Arthur Foundation continued the “legislative Advocacy and Sensitization Workshop with relevant stakeholders on the Implementation of the Administration of Criminal Justice in Niger State” in Minna Niger State.

In a communiqué issued at the end of the workshop, the Assistant National Publicity Secretary of NBA Mr. Habeeb Lawal Akorede noted that since the introduction of the ACJA 2015, only selected States of the Federation have successfully domesticated the Act. He stated that in view of this, it has become imperative for increased sensitization to promote the domestication and harmonized implementation of the ACJA 2015 across Nigeria, in order to tackle existing and emerging areas of crime and criminality as well as ensure the effective and efficient administration of the criminal justice system.

In his welcome remarks, the Chairman of Minna Branch of the NBA; Gimba Mohammed Esq, described the workshop as apt and timely as Niger State is yet to adopt ACJA 2015, even though machineries have been set in motion for its domestication. He expressed confidence that the gains of the workshop can be brought to bear on the legislation and implementation of the ACJA Law in the state once it comes into fruition in due course.

He thanked the NBA and the MacArthur foundation for finding Niger State worthy of been part of the program.

Delivering the opening remarks, the representative of the NBA President, T. T. Egba Esq., apologized for the unavoidable absence of the NBA President, Paul Usoro SAN. He stated that all participants gathered at the workshop are stakeholders of the criminal justice system, which as it presently exists is bereft with lacunas. He stressed that the ACJA is a good legislation and hopes it will be domesticated in Niger State. He further urged all stakeholders present to cooperate for its smooth passage and domestication. He concluded by saying that it is the NBA’s President’s wish that at the end of the program, participants will benefit from deliberations.

The Project Coordinator, Victor Abasiakan-Etim Esq., in his welcome address introduced the project. He stated that the present criminal justice system in Nigeria is characterized with several challenges which include long adjournments, congestion, over reliance on technicalities, corruption, collapsing infrastructure among others, which in turn affects the confidence of the citizenry in the administration of justice.

He stated that, there is ample evidence of improvement in the criminal justice administration in few states that have adopted the ACJA.  A study by United Nations office on Drug and Crime, UNODC on the time it took to complete prosecution of a case from arrest to judgement showed that nationally, it takes 42 months to conclude a criminal case. But in States where ACJ law is already in force, the period of delay has reduced to an average of 22 months. Niger being one of the states that is contagious to the FCT, with all the collateral burdens and benefits will need a procedural law that can cope with modern realities which the ACJA represents.

In conclusion, the Project Coordinator noted that, the Nigerian Bar Association will continue to count on the support and cooperation of all participants and partners in implementing the outcomes of the sensitization without any delays.

At the conclusion of welcome addresses, the floor was open for goodwill messages from stakeholders.

The Lead Speaker, Dr. Henry A. Akuchie, appreciated the National NBA and the Project Coordinator for the opportunity given to deliver the keynote paper. He stated that, administration of criminal justice refers to the performance of entire justice related actions such as arrest, bail, preventive justice, warrants, criminal trials, plea bargain, sentencing, restorative justice, etc. Through the effective implementation of these actions, a justice system that is effectual to maintaining law and order is thereby achieved. As such, the fundamental objective of judicial punishment is to protect the victims of society and this may effectively be done by swift and certain punishment. The administration of the law, which secures this, is far more effectual to deter from crime than severity in punishment.

He went further to highlight some important aspects of the Act; inclusive of possible challenges. These include but are not limited to;

He concluded by stating that; “For any country to experience economic growth, it must first have a functional judicial system that would not only encourage local and foreign investors but also guarantee conducive environment for such businesses to thrive. Incessant delays reduce the chances of ever concluding cases in a satisfactory manner and in the process, witnesses lose interest, parties to the process die, judges retire, the public lose faith in the judiciary and investors keep off.”

Furthermore, “delay in the delivery of justice is as a result of a compromised system, either in the interest of the prosecution or the defendants. Where delay is as a result of the prosecution or the court itself, the implication is that the fight against corruption is being conducted in violation of the constitutional and statutory guarantees the populace will always judge the justice system by its results.” He concluded.

Photos: Sights and Sounds of the Just Concluded NBA Aba 2017...