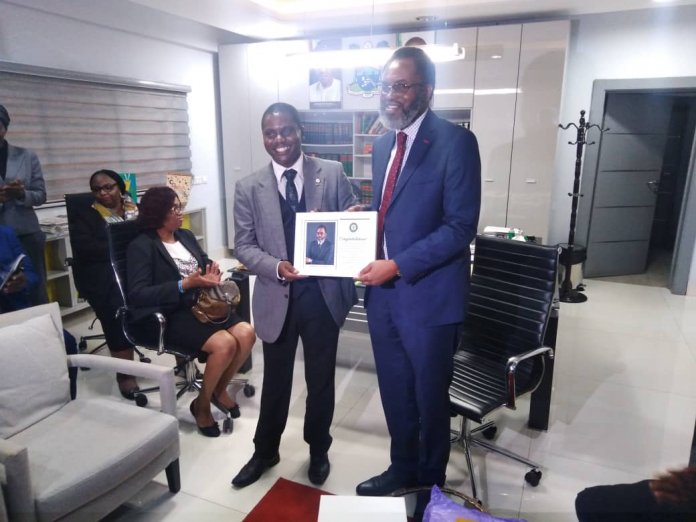 The Chairman of the Nigerian Bar Association (NBA) Ikorodu Branch Mr. Bayo Akinlade has urged the newly appointed Attorney General of Lagos State Mr. Moyosore Onigbajo SAN to make the independence of the Judiciary a prirority during his tenure as the chief law officer of the state.

Mr. Akinlade stated this when he led the members of the branch on a courtesy visit to the AG at his office in Lagos.

“We urge the Learned AG to make the independence of the Judiciary a priority during your tenure. As the Chief Law officer, your advice to the Governor on this issue is very important. It is embarrassing to have our chief judge asking for handouts from the Governor; it sends the wrong signals to everyone and robs the judiciary of its impartiality and its position as the last hope of the common man. We, in the NBA Ikorodu Branch will support you in this regard; we will add our voice to yours in compelling the Executive to completely hands off the affairs of the Judiciary.”

Among other things, Mr. Akinlade urged the AG to also consider the welfare of law officers in the state.

“Our members in the Ministry of Justice and in the Local Councils are heavily overworked and in many cases are not treated with the dignity they deserve as Learned Gentlemen. The fact that they work for government should not make them any less a lawyer as the rest of us. In NBA Ikorodu Branch, I have set up a Forum of Lawyers in the Civil Service so that they can impact positively on the society and be given the due regard they deserve. “

“We are also concerned that it is only in Lagos State that our colleagues in the ministry of justice do not run for leadership position within the NBA. Their exclusion has robbed NBA of the much needed talents required to manage a purposeful NBA. We hope that during your tenure as AG, we will experience a new dimension in this regard.”

On the Administration of Criminal Justice, Mr. Akinlade urged the AG to consider reforms in the prosecution of criminal cases in Lagos State especially in the area of prosecution by law police officers noting that such reform will directly impact on the employment opportunities of lawyers in the state. He pledged the branch’s support in this regard.

Other areas highlighted by Mr. Akinlade in his speech are the collaborative efforts  of the branch with the various justice delivery agencies in Lagos State and the various achievements of the branch in the past one year of his leadership;

“We have had a robust working relationship with the Ministry of Justice through its agencies which includes the Office of the Public Defender (OPD), Citizen’s Mediation Center and Community Services.”

“Most of our work has been with the OPD where we collaborate in the Court Centered Prison Decongestion Initiative and volunteer lawyers accompanying magistrates to their monthly visits to police stations. OPD has supported the Branch by providing capacity building for our members by inviting us to their trainings while we provide support for OPD lawyers by taking a few cases on Probono basis.

“We also work with the CMC on our monthly Legal Aid Clinics where CMC Counsels come to Ikorodu High Court to join NBA members to provide free Legal Services. CMC Counsels also accompany us on community programs from time to time. CMC have also provided capacity building for our members at their own expense.”

“Our relation with the office of the DPP has also improved, especially through our Court Centered Prison Decongestion Initiative which saw the release of over 70 inmates in the last 10 months. The Lagos State Judiciary has been a major supporter in this initiative and its success is largely due to the Judiciary’s cooperation.”

“It is our desire to see more collaboration with the Ministry of Justice with other NBA branches. In this regard, I would like to propose that the number 1 legal officer of this great State hosts a leadership retreat with all NBA Branch Executives, Directors of the Ministry of Justice, Legislators that are lawyers and some senior Judges and magistrates. The purpose of this leadership retreat would be to amongst other things brainstorm on thorny issues that affect the administration of Justice in Lagos state as well as build sustainable relations between the Executive, Legislator, Judiciary and the NBA.”

“Other areas of sustainable cooperation that we are interested in is in the area of getting PROBONO referrals from the MOJ. We are also available to volunteer as private prosecutors in instances where DPP requires our services.”

“I would like to suggest; learned silk that perhaps your office can set up an MOJ/ NBA Liaison Office to effectively engage the NBA in promoting Justice and Law Reform.”

“Our members are concerned with practice at the lands registry. Our jobs are being taken away and the government is not enforcing laws that require that only lawyers can perfect certain documents. We at NBA Ikorodu will be happy to partner with the MOJ in creating awareness in this regard with a view to improving our earning capacity as lawyers.”

“By and large, I would like to pledge our support for you and the Lagos State government in building and promoting a secure, efficient and resourceful justice administration system in Lagos State.”

Mental Wellbeing in the Legal Profession: Take the IBA Survey