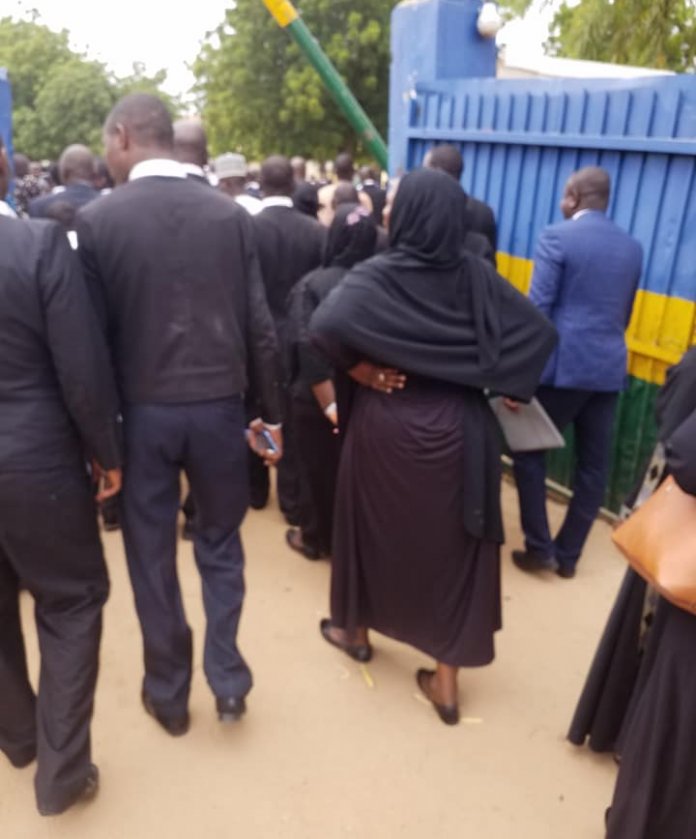 The report of the protest by the Nigerian Bar Association (NBA) Maiduguri Branch was published by Ex Chairman of NBA Ikeja Branch Mr. Adesina Ademola Ogunlana

At about 9 10 am , Mr Mohammed Umaru the Chairman of NBA Maiduguri , sitting with his Executive addressed Branch members gathered at the Bar Centre , numbering about 65 ? He spoke on the previous efforts on the issue at hand and read out the contents of the protest letter the Branch would be submitting to the Borno state Police Command , to the rousing approval of the members .He announced the presence of colleagues from outside jurisdiction like Ikeja( my humble self) Abuja and Damaturu . Our colleague from Abuja , Aljali Askira , Esq and my humble self , with the kind permission of the Chairman gave short solidarity remarks The chairman announced that members would move to the Police Command headquarters by way of motor cars and that placards would not be on display .Members complied gladly.

Soon the Bar of lawyers was soon on our way to the police headquarters
Some thirty minutes later, , the Deputy Commissioner , Administration, standing in for the Commissioner and leading several other senior officers received us ( no less than 80 lawyers ) under a tree . The chair man read the letter out to the police authorities and it was received. .At the direction of the chairman , all the lawyers except about 13 including ‘Lagos Lawyer’ took their leave. Those of us left behind now went to discuss with the police leadership , numbering about 16.

The meeting presided over by a very calm and amiable Deputy Commissionet , Operations , Abdu Umar lasted some 70 minutes. Both parties directly in dispute , Sadiq Kachalla Esq and Superintendent of Police Hussain Lumbo Bulama were present and told their stories.

Summarily, the lawyer who is slsk a university lecturer said he came to the police station in response to his clients call and was even resolving the issue between his client and the complaint when DPO Bulama questioned his participation and personality , threatening him with a lock up and proceeded to do exactly so . The DPO story in brief was that he ordered the lock up of the lawyer because he was railing at him and abusing him( in his own office)
Every body at the meeting realised that DPO was at fault . DCP Abdu Umar blamed him squarely saying his conduct dud not display level handedness and professionalism and went on to offer apologies on behalf of the Police Command to the Bar . An intervention from me that the DPO apologised there and then to Kachalla Esq to end the rift permanently was rebuffed by D P O Bulama to the disappointment of all.

The Bar is determined thereupon to take up the matter against ‘the D P O exclusively .