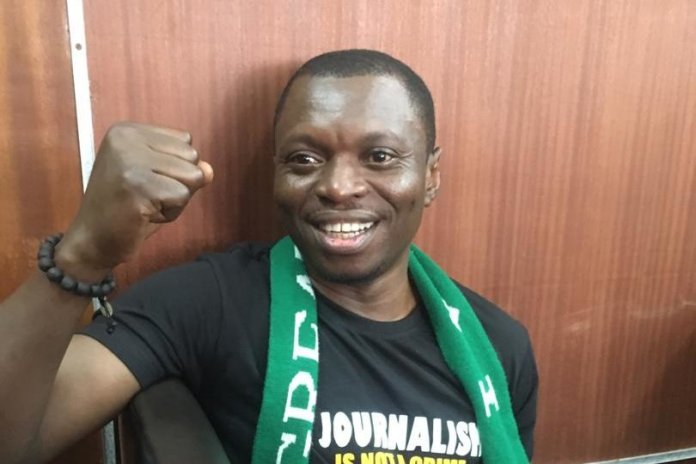 A Nigerian journalist, Agba Jalingo, who is facing treason charges for allegedly criticizing a Nigerian governor, is demanding that his case should be transferred to a new judge.

Mr Jalingo, the publisher of CrossRiverWatch, was arrested on August 22 over a report alleging that the governor of Cross River State, Ben Ayade, diverted N500 million belonging to the state.

He is remanded at the Calabar prison, after Justice Simon Amobeda of the Federal High Court, Calabar, denied him bail.

Mr Jalingo’s demand, according to a letter he wrote on November 27 to the chief judge of the Federal High Court, is based on the publication of leaked audio where the trial judge allegedly said the journalist would be treated like Ken Saro-Wiwa, the environmental activist and Ogoni leader, who was executed by Sani Abacha-led military administration on November 10, 1995.

The leaked audio was published by TheCable, an online newspaper, on November 14.

TheCable reported that Mr Amobeda cited the case of late Saro-Wiwa while he said in the secret recording that the trial would go on whether or not the defence counsel chooses to withdraw from the case.

“Late Gani Fawehinmi walked out on the tribunal in Ogoni matter. What happened? The matter went on and Ken Saro-Wiwa was convicted and sentenced to death,” the paper quoted the judge to have said.

“I told the young man (Jalingo) yesterday, your life now is in the hands of the court,” the judge reportedly said.

Mr Jalingo in the letter told the chief judge, “I see no chance of a fair trial for me in my case” before Justice Amobeda.

He requested that the case be transferred to another court outside Calabar so that the new judge would be “less susceptible to local political pressure”.

Mr Jalingo in his latest prison notes has said he would not “bow to force”, apparently referring to Governor Ayade whom he has accused of running a dictatorial administration in Cross River.

In his first prison notes, Mr Jalingo had called on the people of Cross River to be resolute against dictatorship.

“Dictatorship has never defeated goodwill and a determined people. Even if I end up not standing with you in the summit, remain strong and be rest assured that the arc of life is on our side and we will win.

“When this wind has finished blowing yonder, and it shall soon; we will look back and be glad we stuck our necks on the guillotine and history will only be fair to us, our people shall be free, the will of God would have been done and God’s name will be glorified,” he said.

Mr Jalingo’s trial was on November listed among 10 “most urgent” cases of threats to press freedom around the world.

Amnesty International and several other organisations have been calling for Mr Jalingo’s release from prison.