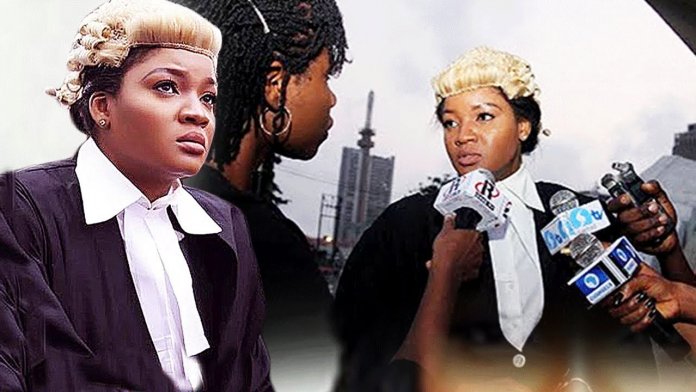 Nollywood is growing in leaps and bounds. Third, only after Hollywood and Bollywood in terms of the number of movies released annually, new Nollywood boasts an increasing number of professionals who have graduated from the world’s leading film schools. The quality of its output is undoubtedly improving.

But Nollywood has always had a lawyer problem. It has arguably always had a doctor one as well but save for saying that I’ve verified that there’s no such condition as a womb becoming “too flexible” following repeated abortions, I’ll leave the medical professionals to contend for their profession to be properly depicted on screen.

The lawyer problem was initially a thoroughly haphazard portrayal of courtroom proceedings, especially in criminal trials. The lawyers were not properly costumed, with bibs, gowns and wigs awry; sometimes there’d be a jury, even though we don’t have jury trials in Nigeria; witnesses would sit in the dock (where the accused should be); the accused would sit beside their lawyers, rather than the dock; defence and prosecution lawyers would sit on the wrong sides; and the actual mechanics of the procedure were entirely at the scriptwriter and director’s discretion, not the system that has been laid down over hundreds of years.

Nollywood’s courtroom lawyer is evolving, thankfully, and plot lines now include the corporate lawyer. Two of Nollywood’s biggest recent blockbusters both relied on corporate law scenarios as the lynchpin of their plots and they are the focus of today’s column. These films were ‘Chief Daddy’ and ‘Lionheart’.

The central legal theme of Chief Daddy was testamentary law – how wills are made and given effect after the death of the testator – the will-maker. (As an aside, even if he was the most irresponsible of philandering men, Chief Daddy left a will. If you are reading this and do not have a will, you should talk to a lawyer, even if you think you do not own that much).

The big legal issue with Chief Daddy was that he had added a codicil to his will. Codicils are amendments to wills. Their purpose is to prevent wills from being torn up and written afresh (for example, where the testator’s estate has shrunk or increased and that needs to be taken into account). In Chief Daddy, the lawyers explained that the codicil was effectively the preamble to the will, that it was the precondition to the will being read. That format is not one that most practicing Nigerian lawyers would be familiar with.

Not only that, the codicil threatened to seal up the will and prevent it being read for 70 years if the conditions it presented were not complied with. This again is a format unknown to law and it perpetuates the false idea that a testator’s word, no matter how bizarre, is final when it comes to the disposition of his assets. At any rate, leaving one’s assets in limbo would certainly not fly.

Finally, when the will was read, Chief Daddy awarded all his children directorships on the board of the company, on the eve of the company going public. I imagine the Securities and Exchange Commission would have something to say about that in real life, as would the new shareholders with significant interest in the company.

In Lionheart, the Chairman of the company took a N1 billion loan, with no other director being aware. In the real corporate Nigeria, even with allowance for backdoor approvals where those happen, the bank would have required at least one other director to sign the documentation and for both directors to give personal guarantees.

ALSO READ   The Healthy Lawyer with Dr. Zulaykha: Being Healthy

The scene where the external auditors reveal the ticking clock of the loan default was probably meant to be comic relief but it was nothing if not bizarre. Audits take days and weeks, not hours but these ones completed theirs in a day. There was no written report (have you seen an audit report without the two thousand disclaimers in the executive summary?) and nothing in the scene resembles anything in real life.

The plot also featured a potential hostile takeover and at least one board meeting was called without the knowledge of the story’s protagonist. It’s not clear if Lionheart Motors had a company secretary but under Nigerian law, even emergency board meetings require a minimum notice period to all directors as a precondition.

To be clear, none of these misrepresentations diminished the entertainment value of either movie but it is these details that will count when the comparisons with Hollywood and Bollywood stop being about the number of releases only and start taking the quality of the productions into account.

Hollywood actors undergo intensive boot camps before they play soldiers and policemen, and other specialist roles.

The authenticity of the films is as important as the expansive shots and the 4k resolution. It would be a good step for productions, especially the big budget ones, to bring in consultants for their movies.

Review of Some of the Significant Decisions – Labour and Employment 2020

Protesting Cross River Magistrates: Dear Governor, Do Not Muzzle An Ox To Keep It From Eating As It Treads Out The Grain Because Those...

Disobedience of Court Orders by Comptroller-General is Unhealthy for Democracy –...