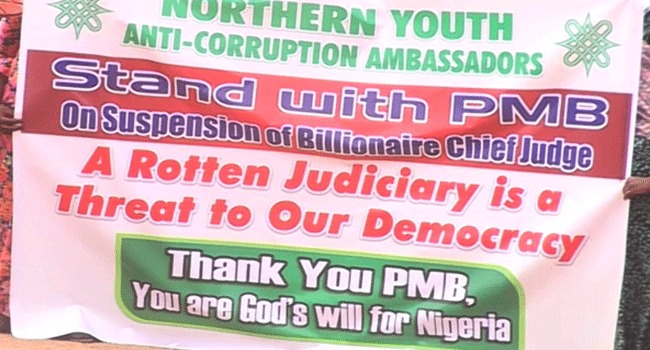 A coalition of northern youths in Kaduna is backing President Muhammadu Buhari’s decision to suspend the Chief Justice of Nigeria (CJN), Walter Onnoghen, thereby calling for his resignation.

The youths took there demands to the streets to protest against those that are calling for the CJN’s reinstatement.

The protesters, who marched through some major roads in Kaduna state capital carrying banners and placards with various inscriptions, commending President Buhari for taking the bold step in cleaning the judiciary of corruption, urging him not to relent in the fight irrespective of whose ox is gored.

Addressing Journalists, the leaders of the coalition groups, who describe those calling for the reinstatement of Justice Onnoghen to his position as enemies of the country, also warned the public from given Justice Onnoghen’s suspension any religious or ethnic colouration but rather look at the gravity of the offence at hand.

According to them, Justice Onnoghen having failed to fully declare his assets to the Code of Conduct Bureau has violated the law, and should, therefore, resign honourably rather than engaging in judicial arms twisting.

Describing the suspension of Justice Onnoghen as a right step in the fight against corruption, the group notes that Nigeria cannot move forward with wrong judges piloting the affairs of the country’s judiciary.

The group, therefore, demanded the immediate dismissal and prosecution of the embattled CJN which they believe will save the country from further embarrassment.

Legal Nuggets For Entrepreneurs: Strategic Positioning for Future Opportunities – By...

My Deaconess Wife Slept with My Typist – Man Tells Court