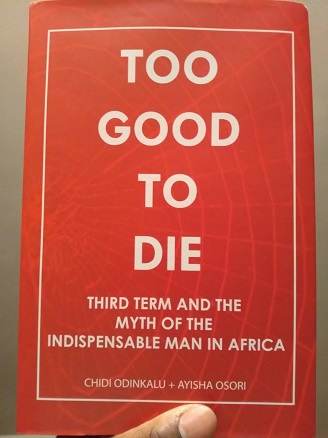 A Rivers High court sitting in Port Harcourt has adjourned to the 4th of February 2019 for ruling on jurisdiction in the libellous suit filed by the former governor of Rivers state, Dr Peter Odili against the former chairman of the National Human Rights Commission, Professor Odinkalu and Ayisha Osori.

Dr Peter Odili is seeking an interlocutory Injunction to stop further distribution of the book, TOO GOOD TO DIE, which is based on how former President Obasanjo plotted and failed in 2006 to amend Nigeria’s constitution for a 3rd term in office.

In the defamation charges prepared for Odili, the former governor said he took note of excerpts of the book in which the authors narrated how late politician, Harry Marshall, was assassinated soon after they publicly fell out with each other in 2003.

The book cited a letter which Marshall had written to the police in Rivers at the time, expressing strong concerns about a growing spate of intimidation and violent attacks against members of the All Nigeria’s Peoples Party (ANPP) in the state.

The book also painted vivid details of how Odili helped bankroll the third term agenda which Obasanjo pushed to perpetuate himself in power beyond the 2007 expiration of his constitutionally-approved two terms of eight years.

“Most of the cash distributed in support of the project were wrapped in bundles bearing the stamp of First Inland Bank. Unknown to most people, First Inland Bank’s history lay buried in networks of loyalty between some of the most influential leaders of the ruling party, including President Obasanjo himself,” the authors wrote on page 162.

“The corporate trail however disclosed a deep financial bond between the president, Senator Ararume and the governments of Bauchi and Rivers States, then ruled, respectively, by two of President Obasanjo’s closest governorship acolytes, Adamu Muazu and Peter Odili, who were at the centre of shadowy, complex, unlawful and, almost certainly, criminal financial operations behind third term,” the authors added.

The Trial judge, Justice Augusta Chukwu after hearing arguments from counsels on jurisdiction, adjourned the case to the 4th of February for ruling on jurisdiction.

Speaking to journalists after the sitting, counsel to Dr Peter Odili, Agabi Kanu, SAN, said his client is in court over a book which is found offensive to his client.

On his part, Professor Odinkalu and Ayisha Osori’s counsel, OPI IDAYE said the ruling on jurisdiction will determine if the case will continue.