The immediate past Commissioner for Housing Ogun State Architect Segun Abiodun has said faulted the recent allegation by the State Governor Prince Dapo Abiodun that the Ogun State Judiciary Complex is architecturally  and structurally defective.

“My attention has been drawn to a statement by Prince Dapo Abiodun the Governor of Ogun State, alleging architectural and structural defects in the new Ogun State Judiciary Complex, Abeokuta. We are constrained to react to this falsehood because of the emerging pattern of a calculated attempt to rubbish all the good works of Senator Amosun as Governor of Ogun State between 2011 and 2019.

His latest attack was on the Ogun State Judiciary Complex which was commissioned on 25 May, 2019 by President Muhammadu Buhari.

The Judiciary Complex was conceived to be a world class facility that is compliant with all accessibility and safety standards to provide the State Judiciary with a befitting environment for the dispensation of justice.

The major features of the complex are:

The beauty and utility of the complex was acknowledged by no less a personality than President Muhammadu Buahri who at the commissioning commended the Amosun Administration for conceiving such a laudable project.

He wondered aloud how the administration was able to fund such a project. The complex has also been widely acknowledged as one of the best judiciary complexes in the country by various stakeholders.

The allegation of architectural and structural defects was to create the impression that both the design and construction have been incompetently executed. This is totally baseless and unfounded.

The Judiciary complex was constructed by one of the most sought after construction companies in the West African sub-region, De Simone Group(Monterossa). Among the recent projects executed by the company are the Embassies of the United States of America in Accra, Ghana, Ouagadougou, Burkinna Faso, Monrovia, Liberia and the Dutch Embassy in Lagos, Nigeria.

Its projects also include Nestle Flower Gate Factory, Sagamu, Nestle Distribution Centre, Sagamu and Unilever Distribution Centre, Agbara, all in Ogun State, just to mention a few. The other contractor Messrs. AFP, (a subsidiary and member of the Julius Berger Group) who handled the panelling and furnishing of the courts, need little or no introduction.

For the record, the architectural design of the judiciary complex was done and supervised by me as the Hon Commissioner for Housing. Incidentally, I designed and supervised the current residence of Prince Dapo Abiodun in Iperu, Ogun State.

The construction and the furnishing company were carefully and characteristically selected to deliver the high standards for which the Amosun Administration was known,
”The Ogun Standard”.

Thankfully the Amosun led Administration foresaw this and ensured that on-going projects were either fully paid for or advance payments of between 80 – 90% were made. But for this pro- activeness, all the projects would have been truncated.

We implore Prince Dapo Abiodun to roll up his sleeves and begin to work for the people of Ogun State rather than chasing shadows, trying to find fault in every project of the Amosun Administration. 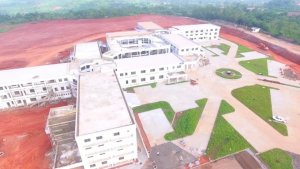 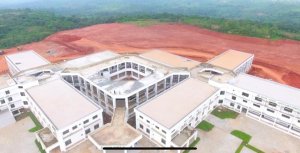