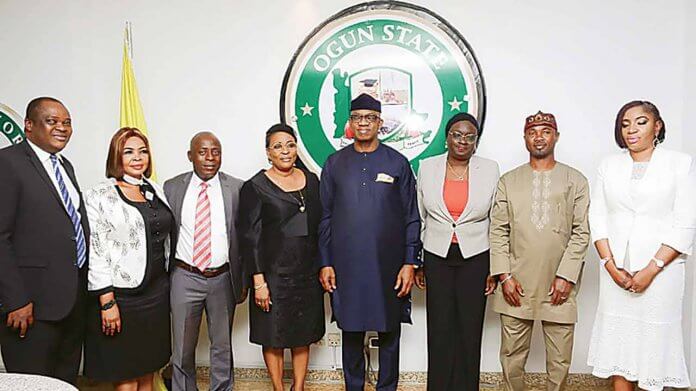 Ogun State Governor Dapo Abiodun has urged members of the newly-inaugurated state’s Judicial Service Commission to shun partisanship, be firm and fair at all times in the discharge of their duties.The governor stated this yesterday in his office at Oke-Mosan, Abeokuta, while inaugurating the first commission in his administration’s five-month history.

In a statement by the Governor’s Chief Press Secretary, Kunle Somorin, Abiodun reminded members of the commission that their role was very sensitive, which demands that they should be circumspect and resist lobbyists. He said: “You must shun partisanship, be firm and be fair at all times in carrying out your duties. The commission has a lot to play in recommending people to a higher Bench.

“You should also bring to bear your vast wealth of experience in the machineries of administration of justice in our state.”Members of the judicial service commission are Joel Soyinka, Nurudeen Aina, Mrs. Yetunde Adesanya and Sola Elegbeji.While the chairman of the commission is statutorily the Chief Judge of the state, Justice Mosunmola Dipeolu, Mr. Kolawole Peters will serve as the secretary of the commission.

According to the governor: “This is a duty that should not be treated lightly. In carrying out your duty, you must live and be seen to be above board as your recommendations could have far-reaching and sometimes great implications for the health of the larger society.”The governor noted that the inauguration marked another symbolic steps towards ensuring effective and efficient administration of justice, which itself was an important component of good governance.

Abiodun, who said that his administration was aware of the importance of effective justice system to the successful implementation of “building our future together, said: “As an administration that desires the symbolic Public Private Partnership (PPP), we appreciate the fact that we must not only ensure that justice is served to our people, but also efficient system of justice.

The governor, who pledged to remove all forms of impediments that could deny the people access to justice, re-assured the judiciary of his administration’s commitment to independent judiciary, just as he assured judiciary officers of the art facilities to ease their work.While assuring of a cordial working relationship with the all the three arms of government, he urged family members and friends to desist from putting undue pressure on the commission’s members to compromise the proper discharge of their duties, saying that their selection was the demonstration of government confidence and the people’s expectations, urging them to conduct themselves with decorum and maturity befitting their new positions.

In her remark, the chief judge of the state charged members of the commission to follow laid down guidelines and be ready to work for the good of the state. Soyinka, who responded on behalf of other members, promised that they would not let the state down by discharging their duties faithfully, thanking the governor for the confidence reposed in them.

NBA Chides Lawmakers Over Criminalizing of Payment of Kidnap Ransom

Court Orders Man to be Flogged for Stealing Waste Bin