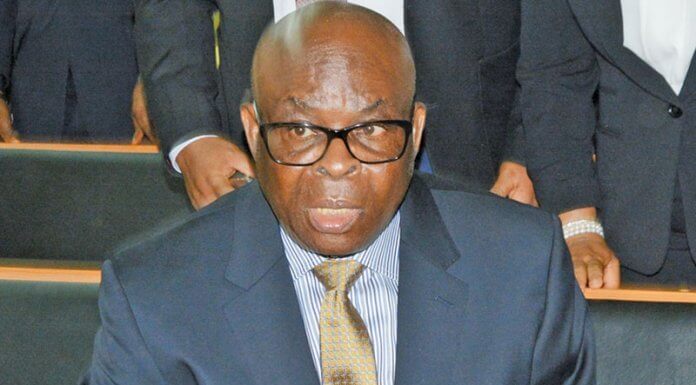 The former Chief Justice of Nigeria, Justice Walter Onnoghen, came out smoking yesterday after the Code of Conduct Tribunal convicted him for false assets declaration.

The tribunal came down heavily on the embattled judicial chief. It relieved him of his top judicial position, barred him from holding public office for 10 years and stripped him of all the funds in the five accounts he was found to have concealed.

“We shall avail ourselves of all the processes and the hierarchy of the judiciary,” Onnoghen’s lead counsel, Mr. Okon Efut SAN, said angrily in reaction to the judgment of the tribunal read by its Chairman, Mr. Danladi Umar.
Onnoghen wasted no moment as he approached the Court of Appeal yesterday with a 16-ground appeal, asking the appellate court to quash his conviction.

Describing the judgment as unconstitutional, the CJN’s lawyer added that it was in breach of his client’s right to fair hearing.

According to him, “The conviction is unconstitutional. It is a breach of fair hearing.
“Before this day, on January 23, 2019, the same judgment had been passed, removing the Chief Justice of Nigeria without fair hearing.

“So, it was fait accompli, it was premeditated. Judgment has been passed before today. Today’s judgment is just a formality.

“We hold the view that the tribunal has not only breached the Constitution of Nigeria, it has breached the fundamental principles of natural justice, equity and good conscience.

“It has not only been able to pass judgment, it has convicted on an offence that was never charged.
“This is an erosion of the fundamental principles of our Constitution and until some questions are answered, for instance, why is it that the due course of justice was not allowed to flow?”

He asked: “Why was judgment passed on January 23 before today, removing the CJN? Why is it that today, even after he has tendered his notice of retirement voluntarily and NJC has taken position, why is it that the tribunal has gone ahead to pass judgment in total disregard to the independence of the NJC and in total disregard to the power of the Senate in this matter?”

Efut stressed that the tribunal, having reversed itself in the case of Justice Sylvester Ngwuta, has breached the principles that hold the judicial precedence together.

Onnoghen’s lawyer stressed: “It is a sad day in our nation’s democracy, and we know that all is not over with this matter. The wheel of justice grinds slowly but surely, this is not the matter that will end here, we shall avail ourselves of all the process and hierarchy of the judiciary and we know that the judiciary will redeem itself, even though seriously battered and bruised.

“The judiciary will do justice. Justice has not been done today but surely, it would be done tomorrow, if not by our court, justice would be done by God. That is our position in this matter.”

While convicting Onnoghen on all six-count charge of failure to declare his assets in line with the provisions of the law for public officers, the three-man panel of the tribunal in a judgment delivered by the chairman, Umar, held that from the testimonies of the prosecution witnesses and the statement of Onnoghen, admitting that he made a mistake of not declaring his five accounts with the Standard Chartered Bank, the tribunal came to the conclusion that Onnoghen was guilty as charged.

The CJN was arraigned by the Code of Conduct Bureau (CCB) for allegedly failing to declare some of his assets as judicial officer. The CCB acting on a petition filed by a non-governmental organisation, the Anti-Corruption and Research-Based Data Initiative (ARDI) had slammed a six-count charge of non-asset declaration against Onnoghen at CCT.

Though he was initially scheduled for arraignment on January 14, 2019, he was, however, not arraigned until February 15, 2019, in response to a bench warrant issued for his arrest by the CCT boss on February 13, 2019.

Onnoghen in the charge was accused of maintaining five domiciliary accounts with the bank, which he did not declare in his asset declaration forms to the CCB, saying three of the accounts are in dollar, euro and pound sterling while the remaining two are in naira.

He pleaded not guilty to the charge following which the prosecution called three witnesses to support its case against Onnoghen.
Onnoghen, however, called only one witness who testified how he obtained and submitted his assets declaration form in 2010.

Delivering judgment on Thursday in the matter, the tribunal held that the admission by Onnoghen that he forgot to declare the bank accounts in the form CCB001 was a clear contravention of Section 23 of the Code of Conduct and Tribunal Act.

The CCT having convicted Onnoghen of the charges went ahead to remove him as Chief Justice of Nigeria and Chairman of the National Judicial Council (NJC).

Umar also ordered that in line with the Section 23 of the Code of Conduct and Tribunal Act, the former CJN is barred from holding any public office for the next 10 years.

Umar also held that since Onnoghen could not adduce any evidence as to how he got the monies in the undeclared accounts in the Standard Chartered Bank, the monies are thereby confiscated, seized and are to be forfeited to the federal government.

The tribunal stated: ‘’The admission by the defendant in his own handwriting that he forgot to declare the five bank accounts in his asset declaration form CCB001 amounts to a partial confession that the defendant has breached the provision of the CCB/CCT Act as it amounts to refusal to declare assets.

“He is also barred for 10 years from holding public office while the money in the five undeclared bank accounts is hereby seized, confiscated and forfeited to the federal government, having been illegally acquired, since the defendant did not disclose their sources.”

The amounts to be forfeited are, N26.8m; $137,700 and E13,730.
Earlier, the CCT had overruled Onnoghen on his claim that he lacked jurisdiction to hear the charge.
Onnoghen in challenging the jurisdiction of the tribunal to try him being a serving judicial officer and the CJN cited the judgment of an Appeal Court, which held that no serving judicial officer can be tried in any court of law without first passing through the National Judicial Council (NJC) the body responsible for the discipline of judicial officers.

Onnoghen further reminded the tribunal that it had earlier observed the appeal court’s judgment when it dismissed the case of a Supreme Court judge, Justice Sylvester Ngwuta, for lack of jurisdiction.

However, in his ruling, Umar held that Onnoghen was arraigned before him as a public officer and not as a judicial officer and as such, the tribunal was not under the obligation of the NJC.

Umar in reversing itself held that the Constitution cannot be subject to any law or rule of the NJC.
Umar also overruled Onnoghen on the claim that the chairman of the CCT was bound to be biased in the trial owing to the fact that he is being prosecuted by the EFCC on bribery allegations and that the CCT being under the supervision of the presidency was bound to do the biddings of the prosecution.

President Muhammadu Buhari had on January 25, 2019 suspended Onnoghen as CJN based on an exparte order of the CCT and sworn in Justice Tanko Muhammad to serve in acting capacity.

Onnoghen Thursday asked the Court of Appeal, Abuja, to quash the CCT conviction
In his appeal filed yesterday, he also prayed the appellate court to set aside the order of forfeiture of his assets to the federal government made by the CCT.

Filed on his behalf by his lead counsel, Chief Adegboyega Awomolo SAN, he challenged the decision of the tribunal on the grounds that the tribunal erred in law when it convicted him of all the six-count charge.

According to Awomolo, the CCT erred in law when it dismissed Onnoghen’s application challenging the jurisdiction of the tribunal to hear the matter and thus occasioned a grave miscarriage of justice.

Awomolo argued that as at the time the charge was filed against him on January 11, 2019, he was not subject to the jurisdiction of the tribunal.

He further argued that the tribunal erred in law when it assumed jurisdiction having on January 9, 2018 in the case of Justice Sylvester Ngwuta affirmed the position of the Court of Appeal in the case of Ngajiwa and dismissed and acquitted Ngwuta of the charge.

Awomolo said the tribunal erred in law and acted out of jurisdiction when it ordered that the assets of the appellant be confiscated and therefore occasioned grave miscarriage of justice.

Part of the 16 grounds the appeal was predicated upon include the claim that the tribunal erred when it held that Onnoghen confessed to the charge framed by admission and use that as a basis to hold that Onnoghen did not declare his assets from 2005 when he was appointed Justice of the Supreme Court.

The appellant further wondered how the tribunal could convict him on charge of false assets declaration when the five accounts in Standard Chartered Bank were declared in 2016.

Part of the reliefs sought in the appeal, however, include an order setting aside the judgment of the tribunal on the grounds that it lacked jurisdiction to hear the charge; an order holding that the tribunal ought to have recuse itself from the matter based on the allegations of bias, and an order discharging and acquitting Onnoghen from the charge.