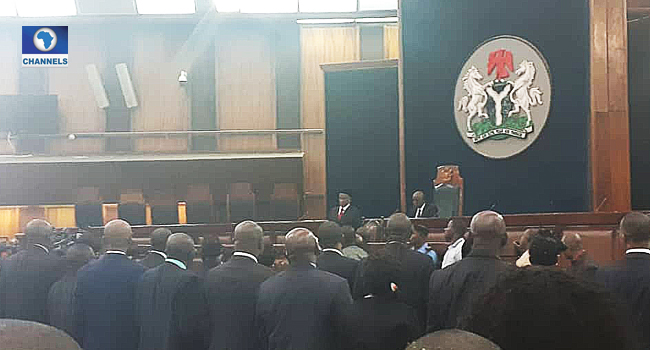 Justices of the Supreme Court on Saturday shunned the inauguration of members of the election petitions tribunal by the Acting Chief Justice of Nigeria (CJN), Justice Ibrahim Tanko Mohammed.

The event was held at the Supreme Court Complex, Abuja on Saturday.

The absence of the justices may not be unconnected with the crisis at the highest echelon of the nation’s judiciary following the corruption charges against the embattled CJN Walter Onnoghen over his alleged non-declaration of assets and his subsequent suspension by President Muhammadu Buhari on Friday.

The Acting CJN Mohammed swore-in 250 members of the election petitions tribunal panels for the 2019 general elections in the country.

Speaking during the inauguration, Justice Mohammed charged the tribunal members to know that they are accountable to God under the oath they have just sworn.

“This is an ethical undertaking to justice as well as uphold the Rule of Law in our courts. As such, I implore you to discharge your onerous duty diligently and with the fear of God Almighty. The judiciary is in trying times, and you must stand to protect and uphold the integrity of this arm of government,” he said.

“I therefore congratulate you on this appointment and I urge you to see this assignment as a call to greater service to your nation. I encourage you to uphold and enhance the honour and standing of the judiciary and I pray that the Almighty Allah will bestow upon you strength, good health and wisdom in the performance of your duties.”

The Acting CJN also apologised to the newly inaugurated election tribunal members for his inability to personally shake hands with each of them due to lack of time.

Businessman Attacks Keyamo in Court, Calls Him a ‘Sellout’