Home News Osinbajo, 131 Others Honoured at the Body of Benchers Award Ceremony 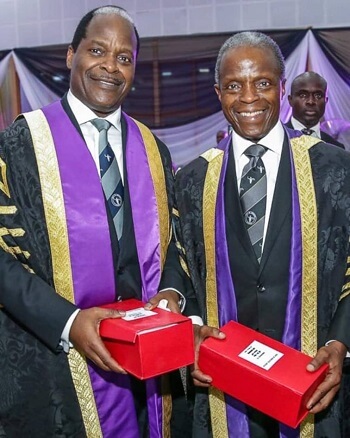 The Vice President, Prof. Yemi Osinbajo SAN  and 131 others were among those presented with the award at the Body of Benchers of Nigeria Award night held at the National Judicial Institute, Abuja.

The Body of Benchers is a statutory body established by the Legal Practitioners Act, I962 responsible for Call to the Bar of persons seeking to be legal practitioners as well as discipline of erring lawyers.

A Life Bencher serves in the body for life and is a legal practitioner of the highest distinction.

In his remarks, Osinbajo said he was elated by the honour and commended the body for the extraordinary leadership it had provided over the years

He said that the Body had borne the enormous responsibility of being the conscience, arbiter, judge and interlocutor for the legal profession and administration of justice system.

I am deeply honoured to have been preferred to the prestigious rank of Life Bencher.

It is humbling, but also exciting to be reminded that one still has more to offer. I owe gratitude to the remarkable men and women teachers, mentors, partners and students, who have contributed to my professional experience. I accept this honour as a call to greater responsibility.

Perhaps, one should also seize this opportunity to salute all distinguished colleagues, seniors and juniors alike, who have internalised the application of the rule of law in the most difficult circumstances.

Stood for the helpless through advocacy; demanded transparency and accountability in all spheres; and pushed for positive reforms in the advancement of not just our system of justice, but also all the ramparts upon which our democracy is built, alongside our nationhood and common patrimony.

Today, our profession stands at a critical cross-road. Yet, the different possible paths that we could take have, to my mind, never been as illuminated and clear as they are today. One path is the path of business as usual which of course means that we will face the extinction of our credibility soon enough.

The other is the path of renewal, the right path; a more courageous even if more difficult path.

He said that the weaknesses that had recently been exposed in the profession, as disturbing as they were, had provided great opportunity for deep introspection and self-assessment.

He said that the benchers owed the young and aspiring lawyers the duty to set the ground rules right and to lead by example.

According to him, as custodians of the law, lawyers owe the nation, at the very least, the duty to ensure the proper functioning of the justice system.

Osinbajo said that the professional practice and the courts must always measure up to the moral, ethical and statutory standards ascribed to them.

Whether we sit at the Bar or on the bench, we bear the responsibility for a fair and just society; a free, fair and impartial justice system that ushers in progressive reforms in governance and protects the social structure of our nation.

Our everyday practice of law has the potential to either strengthen or weaken our democratic values and institutions.

The sobriquet learned that everyone ascribes to us, suggests amongst other attributes, that we are- skilled not only in the art of our trade/calling, but also in the mechanics of a just society.

That just society cannot be established by mere wishes or rhetoric; it can only be by deliberate action and sacrifice especially of those of us to whom our profession has so generously conferred membership of its highest body, he said.

He congratulated all the honorees, adding that award from the most distinguished Body of the profession was worthy of commendation.

Earlier, in his address, the Chairman, Body of Benchers of Nigeria, Alhaji Bashir Dalhatu, said that the a system had been put in place to recognise those whose efforts contributed in maintaining and sustaining the values of the profession.

In a goodwill message, Senate President, Bukola Saraki, said that legal practitioners were defenders of Nigerias democracy and urged them to discharge their duties creditably.

On his part, Speaker of the House of Representatives, Yakubu Dogara, said he was delighted that the works of the awardees were being acknowledged.

He said that the gesture would spur them into serving the country more.

Awards were also presented to past chairmen of the body.

The event also attracted governors of Sokoto, Plateau and Bayelsa state as well as the Secretary to the Government of the Federation.

Some members of the Federal Executive Council were attended the event.