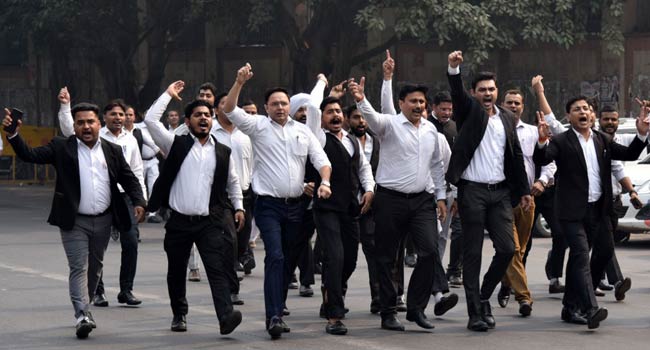 Hundreds of Indian police staged a rare and angry protest on Tuesday (Nov 5) after a row with lawyers that initially started over a parking space degenerated into ugly clashes.

The two groups – who usually rub along in India’s vast court system – have been at loggerheads since the weekend.

The original dispute – over who had rights to a particular Delhi parking spot – escalated on Saturday with barristers setting fire to a police van and other vehicles as officers ransacked lawyers’ chambers.

Video footage later emerged showing a fully-robed advocate punching and slapping a policeman as he attempted to flee on a motorbike, prompting Tuesday’s protest.

“We want justice. We also have human rights, the guilty lawyers must be punished severely,” one of the protesting policemen told reporters.

“The government and the people expect us to uphold the law, it is our big responsibility,” Patnaik said.

Lawyers, for their part, have also been protesting, with some threatening to go an indefinite strike.

Social media users mocked the showdown between those tasked with upholding the law.

“What times we are witness to! Agents of law and order – lawyers and police – are up against each other. This would go down in history,” tweeted a former radio presenter.

“I thought if police unnecessarily beat up someone, lawyers are there to demand justice. Now, lawyers are doing the beating up, and police are demanding justice,” tweeted Ramesh Srivats.