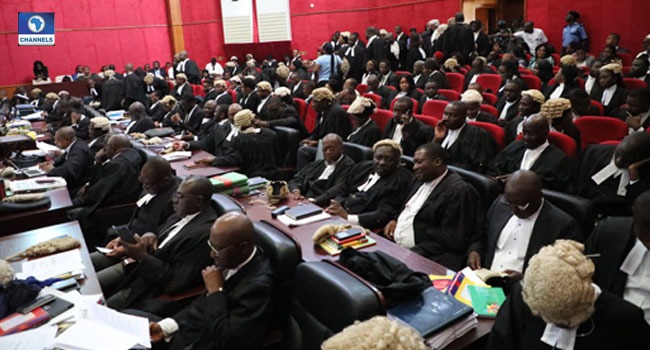 The Presidential Election Petitions Tribunal has continued proceedings to hear all applications in the petition filed by the Hope Democratic Party (HDP) challenging the election of President Muhammadu Buhari.

The HDP through its counsel had informed the tribunal of two applications.

One of the applications is for leave of court to amend their brief and also an order of the tribunal restraining President Buhari from presenting himself for the inauguration.

The party also wants the court to stop the acting CJN from swearing-in the President.

According to them, if the President is allowed to be sworn-in it will prejudice their case.

President Buhari on his part, through his lawyers, is asking the tribunal to strike out the petition of the HDP for lacking merit.

Meanwhile, the Chairman of the tribunal, Justice Zainab Bulkachuwa, may be deciding if she will remain as the presiding judge of the Presidential Election Tribunal as the Peoples Democratic Party (PDP) and  Atiku Abubakar have filed an application asking her to withdraw from the panel.

Their reasons are hinged on her marriage to a senator-elect on the platform of the All Progressives Congress (APC) and also her mother and child relationship with a card-carrying member of the APC.

They also accused her of pre-judging their petition when it has not been heard by the tribunal.

According to the PDP and its Presidential Candidate, Justice Bulkachuwa by her Statement at the inaugural sitting of the tribunal that “no matter how well conducted an election is, there is bound to be a dispute”.

The PDP said in their motion that by this statement justice Bulkachuwa has already taken a stance that the last election was well conducted and the petition of the PDP is one of such disputes.

Melaye Fails to Appear in Court for Trial; His Counsel Alleges...