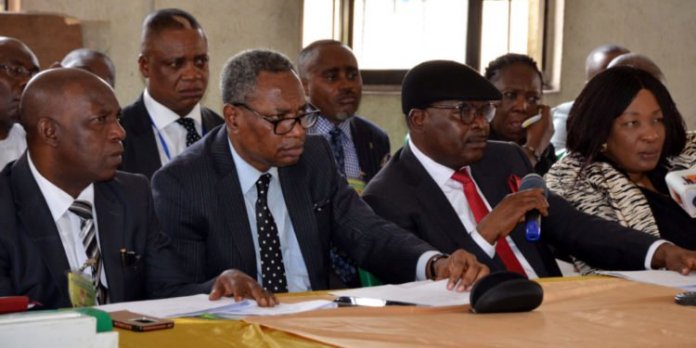 The Presidential Committee on Prisons Reform and Decongestion has ordered the unconditional release of three family members on death row in Enugu Maximum Prisons.

The Chairman of the committee, Justice Ishaq Bello gave the order on Wednesday during their sitting in Enugu.

Bello said that the committee after reviewing the circumstances that led to the incarceration and subsequent conviction of the inmates was convinced that they needed to be set free.

News Agency of Nigeria (NAN) reports that the inmates Azubuije Ehirio, 86, his son, Ehiodo Azubuije, 33 and cousin, Ngozi Onyekwere were in 2005 sentenced to death by hanging by an Abia State High Court.

The inmates, who hailed from Isiala Ngwa in Abia State, were convicted for murder.

When their matter was called up, the octogenarian told the court that they were unjustly convicted by the court and had no money to go on appeal.

Ehirio said that he had a dispute with a member of their community who attempted to take their ancestral land by force.

He said that armed robbers killed the man’s child whom he gave his name as Emeka within the same time and the man accused and arrested him.

“My son who was living in Port Harcourt at the time heard that I was arrested by the police and came back. The man also arrested him along with my cousin,” he said.

Ehirio said that they were subsequently charged to court on a trumped murder charge, convicted and sentenced to death by hanging.

When asked whether they appealed the judgment, Ehirio said that their family had no money to go on appeal.

He said that they had been in prison for 14 years for an offence they did not commit.

After listening to the submission and reviewing their remand notice, Bello expressed the desire of the committee to set them free.

“Our decision is that we are convinced after reviewing the circumstances surrounding and we will let them go.

“You should be grateful to God and remain of good behaviour and never engage in dispute again,” he said.

Bello advised them to always obey constituted authority as they go home.

He said that the committee would give them N10, 000 each for their transport fare back to their community.