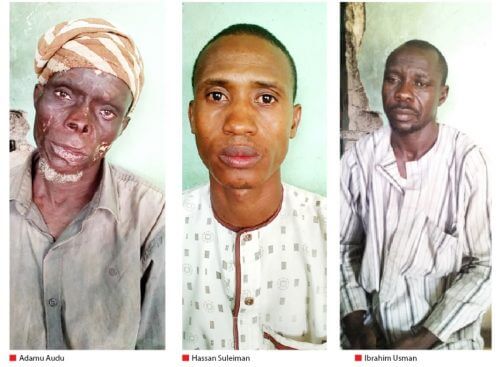 Outrageous! This is the word that came to my mind when I read about the paedophile rape sentence issued in Zaria this week. Imagine this if you can. Two school girls were on their way to school one morning when they were waylaid and raped by three adult, married men. The girls are aged nine and ten years old respectively.

According to Aminiya newspaper of yesterday, the nine-year-old (name withheld) is the victim of two men, Hassan Suleiman and Ibrahim Usman. While the ten year old is the victim of Adamu Audu, the third rapist.

Now for the outrageous part. The judge of the Sharia Court in Tudun Wada Zaria, who found the two men guilty, after they themselves had pleaded guilty to the crime, sentenced them to one year imprisonment or the option of seven thousand naira fine in addition to twenty strokes of the cane each.

I don’t know by what yardstick Judge Iliyasu Muhammad Umar arrived at his judgement, but to give three paedophiles, who were caught in the act, and who pleaded to the crime, an option of N7000 fine is beyond my comprehension.

Even if it was consensual intercourse, the fact that the girls are minors and these are adult men who know all about the sinfulness and other implications of the act, they deserve a stiffer penalty than one year or the option of N7000 fine. I understand that the judge is constrained by the provisions of the penal code and can therefore not give a fully Sharia-based ruling but surely even within the penal code paedophile rape is a major crime, isn’t it?

Or are we so indifferent to the plight of the victims that we all shy away from giving the perpetrators the punishment they deserve? Or can it be because these are children of poor, ordinary Nigerians that even the law cannot stand for them when they are victims of such an crime?

Just so we know, the victim of rape is already serving a life sentence because the trauma she has been subjected to will remain with her for life. Even if such a victim is a full grown adult woman, the pain and humiliation of being so forcefully defiled will forever leave a mark on her psyche.

Now imagine if such an ordeal is visited on a little girl who has no clear notion of sexual intimacy and whose body is not even ripe for it. For sure this is a child who will be scarred for life. In addition to the physical pain and psychological trauma she experienced, is the possibility of contracting a sexually transmitted disease, even the deadly HIV/AIDS, an unwanted pregnancy and some ruptured organs due to the force of the encounter.

With all these horrific possibilities, is it too much to ask that rapists be dealt with so severely that they never do it again and so that others will see it as a deterrent?

This is why I find judge Ilyasu Umar’s verdict not only outrageous but truly painful.

However I was glad to read that the Kaduna State Commissioner for Women affairs, Hajiya Hafsat Muhammad Baba, is disappointed with the court ruling. Also speaking to Aminiya newspaper, she said she expected a stiff penalty because the reviewed legal provision for a rapist is a life sentence, if the victim is a minor. I admit that I’m unaware of this penalty but I gladly welcome it.

What remains is for the commissioner to go beyond her lamentations and file an appeal against this Zaria court ruling on behalf of the little girls who were defiled by dirty, unscrupulous men. Her ministry must take the lead to ensure that justice is served on behalf of these two girls, even though their parents are too poor to get it.

I’m also appealing to all NGOs involved in female advocacy, religious and otherwise, to join the crusade to properly punish these Zaria rapists and to seek all necessary assistance for their poor victims. It’s my hope that such a coalition is possible in the nearest future, and I hereby offer myself for full membership.